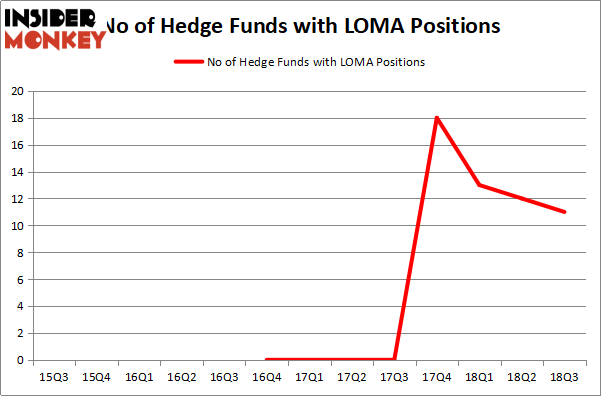 Because Loma Negra Compania Industrial Argentina Sociedad Anonima (NYSE:LOMA) has faced falling interest from the entirety of the hedge funds we track, it’s safe to say that there exists a select few money managers who were dropping their full holdings heading into Q3. It’s worth mentioning that Zach Schreiber’s Point State Capital dumped the largest stake of the “upper crust” of funds tracked by Insider Monkey, totaling about $25.1 million in stock, and Jos Shaver’s Electron Capital Partners was right behind this move, as the fund said goodbye to about $6.4 million worth. These transactions are intriguing to say the least, as aggregate hedge fund interest dropped by 1 funds heading into Q3.

As you can see these stocks had an average of 5 hedge funds with bullish positions and the average amount invested in these stocks was $39 million. That figure was $20 million in LOMA’s case. SSR Mining Inc. (NASDAQ:SSRM) is the most popular stock in this table. On the other hand Summit Midstream Partners LP (NYSE:SMLP) is the least popular one with only 3 bullish hedge fund positions. Compared to these stocks Loma Negra Compania Industrial Argentina Sociedad Anonima (NYSE:LOMA) is more popular among hedge funds. Considering that hedge funds are fond of this stock in relation to its market cap peers, it may be a good idea to analyze it in detail and potentially include it in your portfolio.