Is LMT A Good Stock To Buy Now?

A whopping number of 13F filings filed with U.S. Securities and Exchange Commission has been processed by Insider Monkey so that individual investors can look at the overall hedge fund sentiment towards the stocks included in their watchlists. These freshly-submitted public filings disclose money managers’ equity positions as of the end of the three-month period that ended September 30, so let’s proceed with the discussion of the hedge fund sentiment on Lockheed Martin Corporation (NYSE:LMT).

Is LMT a good stock to buy now? The smart money was getting less bullish. The number of bullish hedge fund bets retreated by 6 in recent months. Lockheed Martin Corporation (NYSE:LMT) was in 47 hedge funds’ portfolios at the end of the third quarter of 2020. The all time high for this statistic is 55. Our calculations also showed that LMT isn’t among the 30 most popular stocks among hedge funds (click for Q3 rankings and see the video for a quick look at the top 5 stocks). There were 53 hedge funds in our database with LMT holdings at the end of June.

At Insider Monkey we leave no stone unturned when looking for the next great investment idea. For example, the House passed a landmark bill decriminalizing marijuana. So, we are checking out this cannabis tech stock right now. We go through lists like the 15 best blue chip stocks to buy to pick the best large-cap stocks to buy. Even though we recommend positions in only a tiny fraction of the companies we analyze, we check out as many stocks as we can. We read hedge fund investor letters and listen to stock pitches at hedge fund conferences. You can subscribe to our free daily newsletter on our website. Keeping this in mind we’re going to review the fresh hedge fund action regarding Lockheed Martin Corporation (NYSE:LMT).

Do Hedge Funds Think LMT Is A Good Stock To Buy Now?

At the end of the third quarter, a total of 47 of the hedge funds tracked by Insider Monkey held long positions in this stock, a change of -11% from the previous quarter. By comparison, 51 hedge funds held shares or bullish call options in LMT a year ago. With hedgies’ positions undergoing their usual ebb and flow, there exists an “upper tier” of noteworthy hedge fund managers who were upping their stakes meaningfully (or already accumulated large positions). 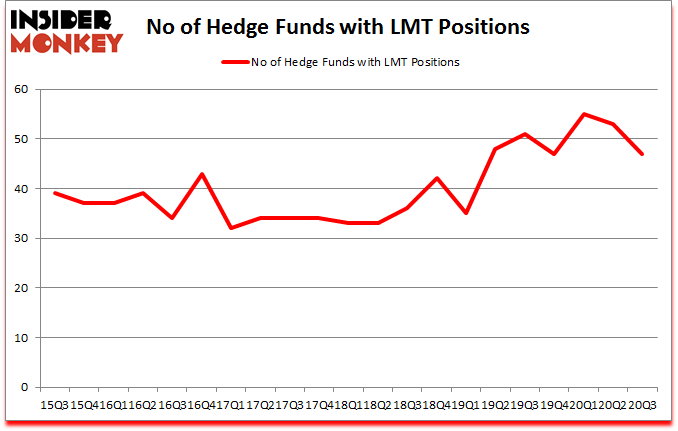 Of the funds tracked by Insider Monkey, Arrowstreet Capital, managed by Peter Rathjens, Bruce Clarke and John Campbell, holds the biggest position in Lockheed Martin Corporation (NYSE:LMT). Arrowstreet Capital has a $479.6 million position in the stock, comprising 0.8% of its 13F portfolio. Sitting at the No. 2 spot is GQG Partners, led by Rajiv Jain, holding a $471.2 million position; 1.6% of its 13F portfolio is allocated to the stock. Remaining members of the smart money with similar optimism encompass John Overdeck and David Siegel’s Two Sigma Advisors, and Cliff Asness’s AQR Capital Management. In terms of the portfolio weights assigned to each position Heard Capital allocated the biggest weight to Lockheed Martin Corporation (NYSE:LMT), around 8.7% of its 13F portfolio. Horseman Capital Management is also relatively very bullish on the stock, earmarking 2.6 percent of its 13F equity portfolio to LMT.

Since Lockheed Martin Corporation (NYSE:LMT) has faced bearish sentiment from the smart money, it’s easy to see that there exists a select few money managers who sold off their positions entirely by the end of the third quarter. Intriguingly, Matthew Tewksbury’s Stevens Capital Management cut the biggest investment of the 750 funds tracked by Insider Monkey, totaling close to $9.3 million in stock, and Benjamin A. Smith’s Laurion Capital Management was right behind this move, as the fund dumped about $8.6 million worth. These transactions are intriguing to say the least, as aggregate hedge fund interest was cut by 6 funds by the end of the third quarter.

As you can see these stocks had an average of 42.6 hedge funds with bullish positions and the average amount invested in these stocks was $2823 million. That figure was $1665 million in LMT’s case. Wells Fargo & Company (NYSE:WFC) is the most popular stock in this table. On the other hand PetroChina Company Limited (NYSE:PTR) is the least popular one with only 6 bullish hedge fund positions. Lockheed Martin Corporation (NYSE:LMT) is not the most popular stock in this group but hedge fund interest is still above average. Our overall hedge fund sentiment score for LMT is 49. Stocks with higher number of hedge fund positions relative to other stocks as well as relative to their historical range receive a higher sentiment score. This is a slightly positive signal but we’d rather spend our time researching stocks that hedge funds are piling on. Our calculations showed that top 20 most popular stocks among hedge funds returned 41.3% in 2019 and outperformed the S&P 500 ETF (SPY) by 10 percentage points. These stocks gained 32.9% in 2020 through December 8th and beat the market again by 16.2 percentage points. Unfortunately LMT wasn’t nearly as popular as these 20 stocks and hedge funds that were betting on LMT were disappointed as the stock returned -5.6% since the end of September (through 12/8) and underperformed the market. If you are interested in investing in large cap stocks with huge upside potential, you should check out the top 20 most popular stocks among hedge funds as many of these stocks already outperformed the market so far this year.

Is LMT A Good Investment Right Now?is LMT a good stock to buyNYSE:LMTSentiment Score Between 40 and 50Yahoo Finance