Is Littelfuse, Inc. (LFUS) Going to Burn These Hedge Funds?

“Value has performed relatively poorly since the 2017 shift, but we believe challenges to the S&P 500’s dominance are mounting and resulting active opportunities away from the index are growing. At some point, this fault line will break, likely on the back of rising rates, and all investors will be reminded that the best time to diversify away from the winners is when it is most painful. The bargain of capturing long-term value may be short-term pain, but enough is eventually enough and it comes time to harvest the benefits.,” said Clearbridge Investments in its market commentary. We aren’t sure whether long-term interest rates will top 5% and value stocks outperform growth, but we follow hedge fund investor letters to understand where the markets and stocks might be going. That’s why we believe it would be worthwhile to take a look at the hedge fund sentiment on Littelfuse, Inc. (NASDAQ:LFUS) in order to identify whether reputable and successful top money managers continue to believe in its potential.

Littelfuse, Inc. (NASDAQ:LFUS) was in 22 hedge funds’ portfolios at the end of the third quarter of 2018. LFUS has seen an increase in support from the world’s most elite money managers recently. There were 20 hedge funds in our database with LFUS positions at the end of the previous quarter. Our calculations also showed that LFUS isn’t among the 30 most popular stocks among hedge funds.

How have hedgies been trading Littelfuse, Inc. (NASDAQ:LFUS)? 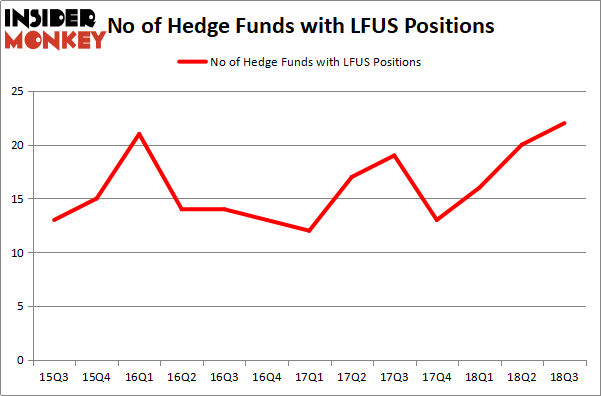 More specifically, Fisher Asset Management was the largest shareholder of Littelfuse, Inc. (NASDAQ:LFUS), with a stake worth $106 million reported as of the end of September. Trailing Fisher Asset Management was Ariel Investments, which amassed a stake valued at $46.3 million. Millennium Management, Giverny Capital, and Renaissance Technologies were also very fond of the stock, giving the stock large weights in their portfolios.

As aggregate interest increased, specific money managers have been driving this bullishness. Renaissance Technologies, managed by Jim Simons, created the most valuable position in Littelfuse, Inc. (NASDAQ:LFUS). Renaissance Technologies had $17.4 million invested in the company at the end of the quarter. Matthew Tewksbury’s Stevens Capital Management also initiated a $1.1 million position during the quarter. The other funds with brand new LFUS positions are Alec Litowitz and Ross Laser’s Magnetar Capital and George Hall’s Clinton Group.

As you can see these stocks had an average of 17.25 hedge funds with bullish positions and the average amount invested in these stocks was $276 million. That figure was $258 million in LFUS’s case. Sterling Bancorp (NYSE:STL) is the most popular stock in this table. On the other hand Blackbaud, Inc. (NASDAQ:BLKB) is the least popular one with only 13 bullish hedge fund positions. Compared to these stocks Littelfuse, Inc. (NASDAQ:LFUS) is more popular among hedge funds. Considering that hedge funds are fond of this stock in relation to its market cap peers, it may be a good idea to analyze it in detail and potentially include it in your portfolio.

Cloudera, Inc. (CLDR): Are Hedge Funds Right About This Stock?
Monthly Newsletter Strategy
Download a free copy of our newsletter and see the details inside!
Hedge Fund Resource Center
Related News
Is Littelfuse, Inc. (LFUS) Going to Burn These Hedge Funds? Littelfuse, Inc. (LFUS): Hedge Funds Are Bullish and Insiders Are Undecided, What Should You Do? This Metric Says You Are Smart to Buy EnerSys (ENS) Hedge Funds Are Betting On OSI Systems, Inc. (OSIS) Do Hedge Funds and Insiders Love GrafTech International Ltd (GTI)? What Hedge Funds Think About General Cable Corporation (BGC) Franklin Electric Co. (FELE): Insiders Aren’t Crazy About It Five Reasons You Need a Day-Trading Mentor 15 Most Important Medical Discoveries of 2018 The 10 Best Islands to Visit in 2019
Billionaire Hedge Funds