Is Legg Mason, Inc. (LM) Finally Back From the Lost Decade?

The company widely benefited from the equity market rally of the 1990s as the lead mutual fund saw huge inflows from beating the market for 15 consecutive years from 1991 to 2005. At the time, portfolio manager Bill Miller was seen as one of the top money managers. The last decade has not been so kind with years of underperformance and large outflows of funds leading the stock to years of losing money for investors.

The company competes with a wide selection of asset managers including Eaton Vance Corp (NYSE:EV) and Waddell & Reed Financial, Inc. (NYSE:WDR). The big beneficiaries of the new investment climate will be firms with high concentration on equity funds, or at least fixed income assets converting to equity. Firms with high fixed income funds that don’t convert to equity funds could actually see asset declines during this period.

See chart below for the ten-year returns: 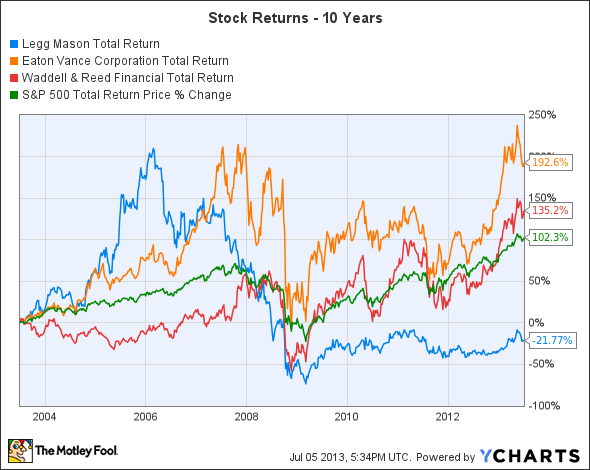 The disappointing aspect of the May assets under management (AUM) release by Legg Mason, Inc. (NYSE:LM) is that the company continues to struggle to grow the asset base. The May balance is smaller then the March 2013 total and only slightly above the number from all the way back to September 2012. For the time periods listed in the below table, the company continues to lose long-term fixed income and liquidity assets at roughly the same rate as the equity assets are growing. Apparently, the equity funds no longer carry the same appeal as back in the 90s and early 00s.

Earnings continue to struggle even with the shift into higher earning equity funds. Equity assets increased from $151 billion at the end of June 2012 to $166 billion in May. The increase of about 10% had no real impact as adjusted earnings actually declined from fiscal 2012 to 2013.

Eaton Vance Corp (NYSE:EV) reported assets that jumped from $197 billion at the end of April 2012 to $247 billion last quarter and $260 billion this year. The company had net inflows of $6.6 billion into long-term funds in the quarter helping lead to the 32% increase in AUM with roughly half the gain from the acquisition of Clifton Investment Management Company. With earnings expectations of $2.53 for fiscal 2014 ending in October, the company has a similar earnings profile as Legg Mason, Inc. (NYSE:LM), yet trades higher due to higher growth and market conviction.