After several tireless days we have finished crunching the numbers from the more than 700 13F filings issued by the elite hedge funds and other investment firms that we track at Insider Monkey, which disclosed those firms’ equity portfolios as of September 30. The results of that effort will be put on display in this article, as we share valuable insight into the smart money sentiment towards Lear Corporation (NYSE:LEA).

Lear Corporation (NYSE:LEA) shareholders have witnessed an increase in support from the world’s most elite money managers in recent months. LEA was in 34 hedge funds’ portfolios at the end of September. There were 32 hedge funds in our database with LEA positions at the end of the previous quarter. Our calculations also showed that lea isn’t among the 30 most popular stocks among hedge funds.

In the financial world there are several tools investors can use to assess publicly traded companies. A pair of the most useful tools are hedge fund and insider trading moves. Our experts have shown that, historically, those who follow the top picks of the best hedge fund managers can trounce the S&P 500 by a solid amount (see the details here).

How have hedgies been trading Lear Corporation (NYSE:LEA)?

At the end of the third quarter, a total of 34 of the hedge funds tracked by Insider Monkey held long positions in this stock, a change of 6% from one quarter earlier. Below, you can check out the change in hedge fund sentiment towards LEA over the last 13 quarters. So, let’s see which hedge funds were among the top holders of the stock and which hedge funds were making big moves. 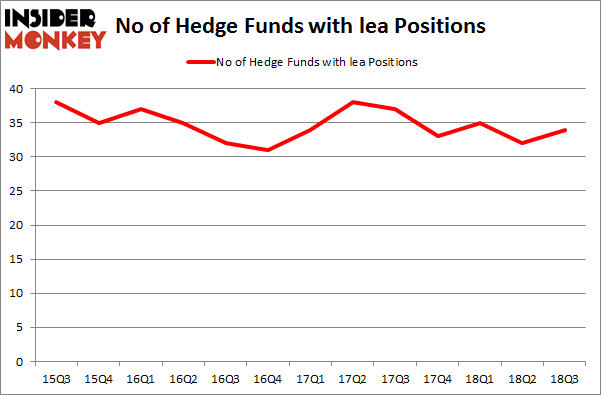 Among these funds, AQR Capital Management held the most valuable stake in Lear Corporation (NYSE:LEA), which was worth $416.9 million at the end of the third quarter. On the second spot was Renaissance Technologies which amassed $73.4 million worth of shares. Moreover, Millennium Management, Anchor Bolt Capital, and Balyasny Asset Management were also bullish on Lear Corporation (NYSE:LEA), allocating a large percentage of their portfolios to this stock.

As you can see these stocks had an average of 23.5 hedge funds with bullish positions and the average amount invested in these stocks was $577 million. That figure was $845 million in LEA’s case. Avery Dennison Corporation (NYSE:AVY) is the most popular stock in this table. On the other hand Shaw Communications Inc (NYSE:SJR) is the least popular one with only 16 bullish hedge fund positions. Compared to these stocks Lear Corporation (NYSE:LEA) is more popular among hedge funds. Considering that hedge funds are fond of this stock in relation to its market cap peers, it may be a good idea to analyze it in detail and potentially include it in your portfolio.