A market correction in the fourth quarter, spurred by a number of global macroeconomic concerns and rising interest rates ended up having a negative impact on the markets and many hedge funds as a result. The stocks of smaller companies were especially hard hit during this time as investors fled to investments seen as being safer. This is evident in the fact that the Russell 2000 ETF underperformed the S&P 500 ETF by 4 percentage points during the first half of the fourth quarter. We also received indications that hedge funds were trimming their positions amid the market volatility and uncertainty, and given their greater inclination towards smaller cap stocks than other investors, it follows that a stronger sell-off occurred in those stocks. Let’s study the hedge fund sentiment to see how those concerns affected their ownership of Kulicke and Soffa Industries Inc. (NASDAQ:KLIC) during the quarter.

Kulicke and Soffa Industries Inc. (NASDAQ:KLIC) investors should be aware of an increase in enthusiasm from smart money lately. KLIC was in 22 hedge funds’ portfolios at the end of September. There were 20 hedge funds in our database with KLIC holdings at the end of the previous quarter. Our calculations also showed that KLIC isn’t among the 30 most popular stocks among hedge funds.

At the end of the third quarter, a total of 22 of the hedge funds tracked by Insider Monkey were long this stock, a change of 10% from the second quarter of 2018. By comparison, 26 hedge funds held shares or bullish call options in KLIC heading into this year. With the smart money’s sentiment swirling, there exists a few noteworthy hedge fund managers who were boosting their holdings considerably (or already accumulated large positions). 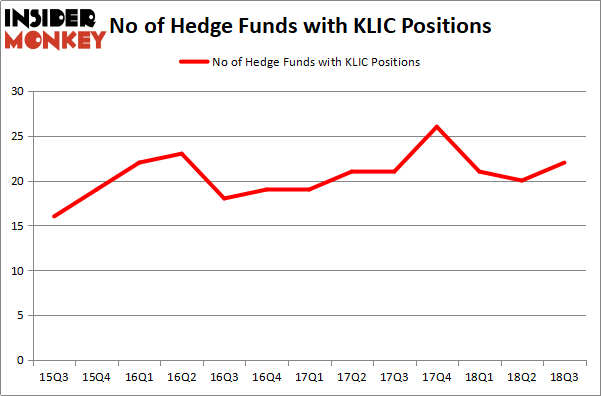 Among these funds, Royce & Associates held the most valuable stake in Kulicke and Soffa Industries Inc. (NASDAQ:KLIC), which was worth $111.5 million at the end of the third quarter. On the second spot was Renaissance Technologies which amassed $38.5 million worth of shares. Moreover, D E Shaw, Two Sigma Advisors, and Whale Rock Capital Management were also bullish on Kulicke and Soffa Industries Inc. (NASDAQ:KLIC), allocating a large percentage of their portfolios to this stock.

Now, key hedge funds were breaking ground themselves. Maverick Capital, managed by Lee Ainslie, established the most outsized position in Kulicke and Soffa Industries Inc. (NASDAQ:KLIC). Maverick Capital had $7 million invested in the company at the end of the quarter. Paul Marshall and Ian Wace’s Marshall Wace LLP also initiated a $3.3 million position during the quarter. The other funds with new positions in the stock are Paul Tudor Jones’s Tudor Investment Corp and Matthew Hulsizer’s PEAK6 Capital Management.

As you can see these stocks had an average of 17.25 hedge funds with bullish positions and the average amount invested in these stocks was $211 million. That figure was $257 million in KLIC’s case. MicroStrategy Incorporated (NASDAQ:MSTR) is the most popular stock in this table. On the other hand Nexa Resources S.A. (NYSE:NEXA) is the least popular one with only 9 bullish hedge fund positions. Kulicke and Soffa Industries Inc. (NASDAQ:KLIC) is not the most popular stock in this group but hedge fund interest is still above average. This is a slightly positive signal but we’d rather spend our time researching stocks that hedge funds are piling on. In this regard MSTR might be a better candidate to consider a long position.

Here is What Hedge Funds Think About Extra Space Storage, Inc. (EXR)
Monthly Newsletter Strategy
Download a free copy of our newsletter and see the details inside!
Hedge Fund Resource Center
Related News
Hedge Funds Begin to Sour on Kulicke and Soffa Industries Inc. (KLIC) The Chief Executive Officers of These Four Companies Buy Shares, Plus Insider Selling at Sanmina Corp (SANM) Hedge Funds Aren’t Crazy About ATMI Inc (ATMI) Anymore Brooks Automation, Inc. (USA) (BRKS): Hedge Funds Are Bullish and Insiders Are Undecided, What Should You Do? Should You Buy Entegris Inc (ENTG)? Hedge Funds Are Dumping Tessera Technologies, Inc. (TSRA) Ultratech, Inc. (UTEK): Hedge Funds Are Bearish and Insiders Are Undecided, What Should You Do? Five Reasons You Need a Day-Trading Mentor 15 Most Important Medical Discoveries of 2018 The 10 Best Islands to Visit in 2019
Billionaire Hedge Funds