Is Korn/Ferry International (KFY) A Good Stock To Buy?

Is Korn/Ferry International (NYSE:KFY) a good bet right now? We like to analyze hedge fund sentiment before doing days of in-depth research. We do so because hedge funds and other elite investors have numerous Ivy league graduates, expert network advisers, and supply chain tipsters working or consulting for them. There is not a shortage of news stories covering failed hedge fund investments and it is a fact that hedge funds’ picks don’t beat the market 100% of the time, but their consensus picks have historically done very well and have outperformed the market after adjusting for risk.

Is Korn/Ferry International (NYSE:KFY) a healthy stock for your portfolio? Investors who are in the know are becoming less hopeful. The number of long hedge fund bets shrunk by 1 in recent months. Our calculations also showed that kfy isn’t among the 30 most popular stocks among hedge funds. KFY was in 20 hedge funds’ portfolios at the end of the third quarter of 2018. There were 21 hedge funds in our database with KFY positions at the end of the previous quarter. 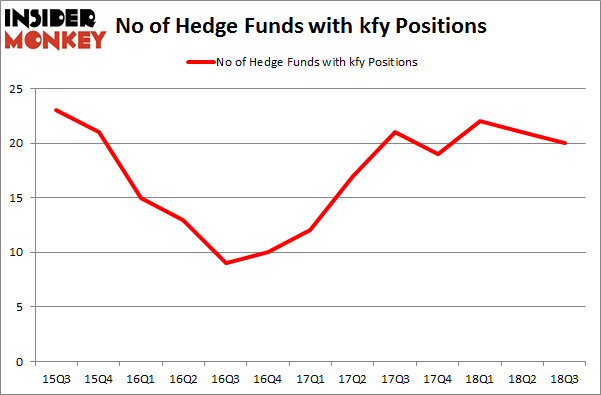 When looking at the institutional investors followed by Insider Monkey, GLG Partners, managed by Noam Gottesman, holds the number one position in Korn/Ferry International (NYSE:KFY). GLG Partners has a $54.5 million position in the stock, comprising 0.2% of its 13F portfolio. Sitting at the No. 2 spot is Royce & Associates, led by Chuck Royce, holding a $18.1 million position; 0.1% of its 13F portfolio is allocated to the stock. Some other professional money managers that hold long positions contain Ian Simm’s Impax Asset Management, Jim Simons’s Renaissance Technologies and Principal Global Investors’s Columbus Circle Investors.

Seeing as Korn/Ferry International (NYSE:KFY) has witnessed bearish sentiment from the aggregate hedge fund industry, it’s safe to say that there lies a certain “tier” of hedgies who were dropping their positions entirely by the end of the third quarter. At the top of the heap, Peter Rathjens, Bruce Clarke and John Campbell’s Arrowstreet Capital cut the largest stake of all the hedgies monitored by Insider Monkey, valued at close to $5.1 million in stock. Peter Algert and Kevin Coldiron’s fund, Algert Coldiron Investors, also dropped its stock, about $3.8 million worth. These transactions are important to note, as total hedge fund interest dropped by 1 funds by the end of the third quarter.

As you can see these stocks had an average of 12.75 hedge funds with bullish positions and the average amount invested in these stocks was $100 million. That figure was $119 million in KFY’s case. Carpenter Technology Corporation (NYSE:CRS) is the most popular stock in this table. On the other hand MakeMyTrip Limited (NASDAQ:MMYT) is the least popular one with only 12 bullish hedge fund positions. Compared to these stocks Korn/Ferry International (NYSE:KFY) is more popular among hedge funds. Considering that hedge funds are fond of this stock in relation to its market cap peers, it may be a good idea to analyze it in detail and potentially include it in your portfolio.

Should You Avoid Vereit Inc (VER)?
Monthly Newsletter Strategy
Download a free copy of our newsletter and see the details inside!
Hedge Fund Resource Center
Related News
10 Biggest Human Resources (HR) Consulting Companies In The World Is Korn/Ferry International (KFY) A Good Stock To Buy? All the Details On 5 Companies’ Latest Quarterly Results, Including Restoration Hardware (RH) Battered Staffing Company Korn/Ferry International (KFY) and Two Other Companies Register Insider Buying Why Korn/Ferry, AMD, Wells Fargo & Two Other Stocks Are in Spotlight Today Silver Capital Management’s Top Five Holdings for Q4 Should The Insider Selling At These Companies Give Cause For Concern? 11 Countries With The Worst Modern Music In The World The Top 5 Robo Advisor Apps of 2018 Five Reasons You Need a Day-Trading Mentor
Billionaire Hedge Funds