In this article you are going to find out whether hedge funds think The Coca-Cola Company (NYSE:KO) is a good investment right now. We like to check what the smart money thinks first before doing extensive research on a given stock. Although there have been several high profile failed hedge fund picks, the consensus picks among hedge fund investors have historically outperformed the market after adjusting for known risk attributes. It’s not surprising given that hedge funds have access to better information and more resources to predict the winners in the stock market.

Is KO a good stock to buy now? Prominent investors were taking an optimistic view. The number of long hedge fund positions improved by 1 lately. The Coca-Cola Company (NYSE:KO) was in 60 hedge funds’ portfolios at the end of the third quarter of 2020. The all time high for this statistics is 62. Our calculations also showed that KO isn’t among the 30 most popular stocks among hedge funds (click for Q3 rankings and see the video for a quick look at the top 5 stocks).

At Insider Monkey we leave no stone unturned when looking for the next great investment idea. For example, we believe electric vehicles and energy storage are set to become giant markets. Tesla’s stock price skyrocketed, yet lithium prices are still below their 2019 highs. So, we are checking out this lithium stock right now. We go through lists like the 15 best blue chip stocks to buy to pick the best large-cap stocks to buy. Even though we recommend positions in only a tiny fraction of the companies we analyze, we check out as many stocks as we can. We read hedge fund investor letters and listen to stock pitches at hedge fund conferences. You can subscribe to our free daily newsletter on our website. Now we’re going to check out the recent hedge fund action surrounding The Coca-Cola Company (NYSE:KO).

What does smart money think about The Coca-Cola Company (NYSE:KO)?

Heading into the fourth quarter of 2020, a total of 60 of the hedge funds tracked by Insider Monkey were long this stock, a change of 2% from one quarter earlier. On the other hand, there were a total of 56 hedge funds with a bullish position in KO a year ago. With hedgies’ capital changing hands, there exists a few noteworthy hedge fund managers who were upping their stakes considerably (or already accumulated large positions). 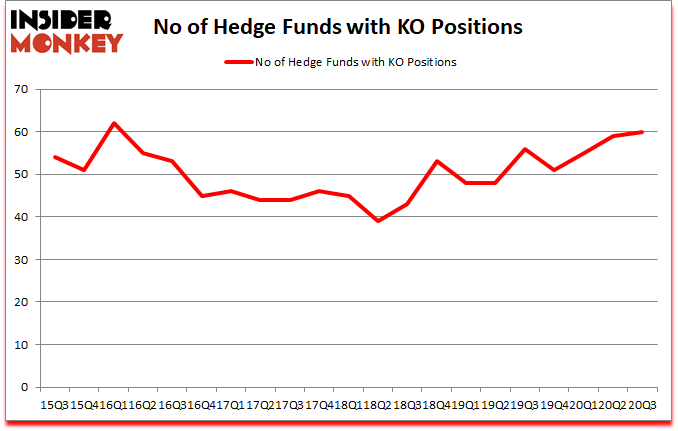 The largest stake in The Coca-Cola Company (NYSE:KO) was held by Berkshire Hathaway, which reported holding $19748 million worth of stock at the end of September. It was followed by Yacktman Asset Management with a $320.4 million position. Other investors bullish on the company included Two Sigma Advisors, Arrowstreet Capital, and Adage Capital Management. In terms of the portfolio weights assigned to each position Berkshire Hathaway allocated the biggest weight to The Coca-Cola Company (NYSE:KO), around 8.63% of its 13F portfolio. Bronson Point Partners is also relatively very bullish on the stock, dishing out 5.94 percent of its 13F equity portfolio to KO.

As aggregate interest increased, specific money managers have been driving this bullishness. Bridgewater Associates, managed by Ray Dalio, established the most outsized position in The Coca-Cola Company (NYSE:KO). Bridgewater Associates had $100.3 million invested in the company at the end of the quarter. Robert Pohly’s Samlyn Capital also made a $52.7 million investment in the stock during the quarter. The other funds with new positions in the stock are Steven Boyd’s Armistice Capital, Brian Scudieri’s Kehrs Ridge Capital, and Louis Bacon’s Moore Global Investments.

As you can see these stocks had an average of 66.7 hedge funds with bullish positions and the average amount invested in these stocks was $7192 million. That figure was $22015 million in KO’s case. Bank of America Corporation (NYSE:BAC) is the most popular stock in this table. On the other hand Novartis AG (NYSE:NVS) is the least popular one with only 25 bullish hedge fund positions. The Coca-Cola Company (NYSE:KO) is not the least popular stock in this group but hedge fund interest is still below average. Our overall hedge fund sentiment score for KO is 62.8. Stocks with higher number of hedge fund positions relative to other stocks as well as relative to their historical range receive a higher sentiment score. This is a slightly negative signal and we’d rather spend our time researching stocks that hedge funds are piling on. Our calculations showed that top 20 most popular stocks among hedge funds returned 41.3% in 2019 and outperformed the S&P 500 ETF (SPY) by 10 percentage points. These stocks gained 31.6% in 2020 through December 2nd and surpassed the market again by 16 percentage points. Unfortunately KO wasn’t nearly as popular as these 20 stocks (hedge fund sentiment was quite bearish); KO investors were disappointed as the stock returned 6.4% since the end of September (through 12/2) and underperformed the market. If you are interested in investing in large cap stocks with huge upside potential, you should check out the top 20 most popular stocks among hedge funds as most of these stocks already outperformed the market in 2020.

Is KO A Good Investment Right Now?is KO a good stock to buyNYSE:KOSentiment Score Between 60 and 70Yahoo Finance