Is Kimco Realty Corp (KIM) A Good Stock To Buy?

Insider Monkey has processed numerous 13F filings of hedge funds and famous investors to create an extensive database of hedge fund holdings. The 13F filings show the hedge funds and investors’ positions as of the end of the third quarter. You can find write-ups about an individual hedge fund’s trades on numerous financial news websites. However, in this article we will take a look at their collective moves and analyze what the smart money thinks of Kimco Realty Corp (NYSE:KIM) based on that data.

Kimco Realty Corp (NYSE:KIM) was in 17 hedge funds’ portfolios at the end of September. KIM investors should pay attention to a decrease in support from the world’s most elite money managers of late. There were 18 hedge funds in our database with KIM holdings at the end of the previous quarter. Our calculations also showed that kim isn’t among the 30 most popular stocks among hedge funds.

Today there are a lot of metrics market participants use to grade publicly traded companies. Two of the most useful metrics are hedge fund and insider trading signals. Our experts have shown that, historically, those who follow the best picks of the elite money managers can beat the S&P 500 by a very impressive amount (see the details here).

At the end of the third quarter, a total of 17 of the hedge funds tracked by Insider Monkey held long positions in this stock, a change of -6% from the second quarter of 2018. Below, you can check out the change in hedge fund sentiment towards KIM over the last 13 quarters. With the smart money’s positions undergoing their usual ebb and flow, there exists a few key hedge fund managers who were increasing their holdings significantly (or already accumulated large positions). 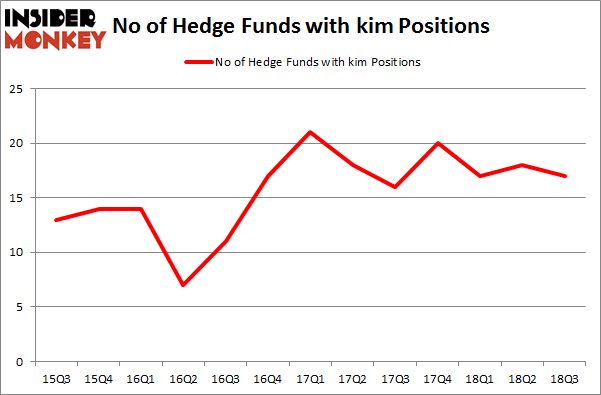 Among these funds, Renaissance Technologies held the most valuable stake in Kimco Realty Corp (NYSE:KIM), which was worth $16.9 million at the end of the third quarter. On the second spot was GMT Capital which amassed $14.2 million worth of shares. Moreover, Citadel Investment Group, Adage Capital Management, and Perella Weinberg Partners were also bullish on Kimco Realty Corp (NYSE:KIM), allocating a large percentage of their portfolios to this stock.

Due to the fact that Kimco Realty Corp (NYSE:KIM) has faced bearish sentiment from hedge fund managers, we can see that there were a few funds who sold off their full holdings by the end of the third quarter. Interestingly, Brian Gustavson and Andrew Haley’s 1060 Capital Management sold off the biggest stake of all the hedgies monitored by Insider Monkey, comprising close to $20.4 million in stock, and Paul Marshall and Ian Wace’s Marshall Wace LLP was right behind this move, as the fund dumped about $3 million worth. These transactions are interesting, as aggregate hedge fund interest fell by 1 funds by the end of the third quarter.

As you can see these stocks had an average of 11.25 hedge funds with bullish positions and the average amount invested in these stocks was $192 million. That figure was $67 million in KIM’s case. PulteGroup, Inc. (NYSE:PHM) is the most popular stock in this table. On the other hand Enel Chile S.A. (NYSE:ENIC) is the least popular one with only 4 bullish hedge fund positions. Kimco Realty Corp (NYSE:KIM) is not the most popular stock in this group but hedge fund interest is still above average. This is a slightly positive signal but we’d rather spend our time researching stocks that hedge funds are piling on. In this regard PHM might be a better candidate to consider a long position.