Is Kforce Inc. (KFRC) Going to Burn These Hedge Funds?

Kforce Inc. (NASDAQ:KFRC) has seen an increase in support from the world’s most elite money managers lately. Our calculations also showed that kfrc isn’t among the 30 most popular stocks among hedge funds.

What have hedge funds been doing with Kforce Inc. (NASDAQ:KFRC)? 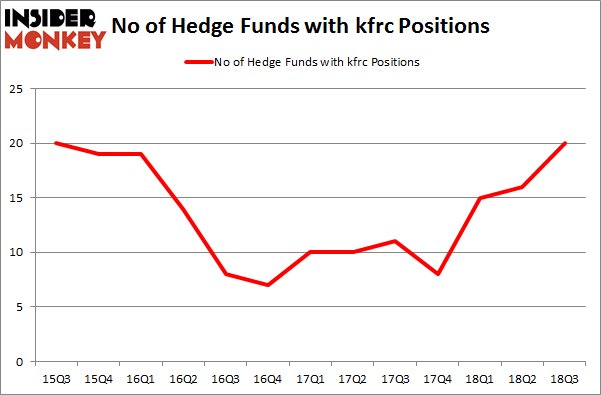 The largest stake in Kforce Inc. (NASDAQ:KFRC) was held by Royce & Associates, which reported holding $19.4 million worth of stock at the end of September. It was followed by AQR Capital Management with a $11.8 million position. Other investors bullish on the company included GLG Partners, Millennium Management, and Citadel Investment Group.

As aggregate interest increased, key hedge funds were leading the bulls’ herd. Tudor Investment Corp, managed by Paul Tudor Jones, initiated the biggest position in Kforce Inc. (NASDAQ:KFRC). Tudor Investment Corp had $0.9 million invested in the company at the end of the quarter. David Costen Haley’s HBK Investments also made a $0.6 million investment in the stock during the quarter. The other funds with new positions in the stock are Bruce Kovner’s Caxton Associates LP and Gavin Saitowitz and Cisco J. del Valle’s Springbok Capital.

As you can see these stocks had an average of 10.75 hedge funds with bullish positions and the average amount invested in these stocks was $85 million. That figure was $78 million in KFRC’s case. TPI Composites, Inc. (NASDAQ:TPIC) is the most popular stock in this table. On the other hand Associated Capital Group, Inc. (NYSE:AC) is the least popular one with only 4 bullish hedge fund positions. Compared to these stocks Kforce Inc. (NASDAQ:KFRC) is more popular among hedge funds. Considering that hedge funds are fond of this stock in relation to its market cap peers, it may be a good idea to analyze it in detail and potentially include it in your portfolio.