There are several ways to beat the market, and investing in small cap stocks has historically been one of them. We like to improve the odds of beating the market further by examining what famous hedge fund operators such as Carl Icahn and George Soros think. Those hedge fund operators make billions of dollars each year by hiring the best and the brightest to do research on stocks, including small cap stocks that big brokerage houses simply don’t cover. Because of Carl Icahn and other elite funds’ exemplary historical records, we pay attention to their small cap picks. In this article, we use hedge fund filing data to analyze JPMorgan Chase & Co. (NYSE:JPM), a large-cap stock that has been delivering small-cap stock returns.

In the 21st century investor’s toolkit there are many indicators market participants can use to evaluate publicly traded companies. A pair of the most useful indicators are hedge fund and insider trading moves. We have shown that, historically, those who follow the top picks of the best hedge fund managers can outperform their index-focused peers by a superb margin. Insider Monkey’s flagship best performing hedge funds strategy returned 17.4% year to date and outperformed the market by more than 14 percentage points this year. This strategy also outperformed the market by 3 percentage points in the fourth quarter despite the market volatility (see the details here).

What does the smart money think about JPMorgan Chase & Co. (NYSE:JPM)? 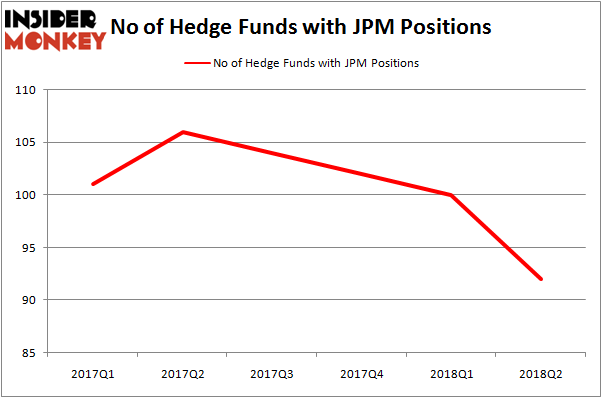 More specifically, Lansdowne Partners was the largest shareholder of JPMorgan Chase & Co. (NYSE:JPM), with a stake worth $1340.7 millions reported as of the end of June. Trailing Lansdowne Partners was Eagle Capital Management, which amassed a stake valued at $643.7 millions. Greenhaven Associates, Brave Warrior Capital, and Argentiere Capital were also very fond of the stock, giving the stock large weights in their portfolios.

Judging by the fact that JPMorgan Chase & Co. (NYSE:JPM) has witnessed bearish sentiment from the entirety of the hedge funds we track, it’s safe to say that there lies a certain “tier” of hedge funds who sold off their full holdings last quarter. Interestingly, Aaron Cowen’s Suvretta Capital Management sold off the biggest investment of the “upper crust” of funds followed by Insider Monkey, valued at close to $135.4 million in stock. Scott Bessent’s fund, Key Square Capital Management, also cut its stock, about $65.2 million worth. These moves are intriguing to say the least, as total hedge fund interest fell by 8 funds last quarter.

As you can see these stocks had an average of 66 hedge funds with bullish positions and the average amount invested in these stocks was $5825 million. That figure was $7011 million in JPM’s case. Visa Inc (NYSE:V) is the most popular stock in this table. On the other hand Royal Dutch Shell plc (ADR) (NYSE:RDS) is the least popular one with only 39 bullish hedge fund positions. JPMorgan Chase & Co. (NYSE:JPM) is not the most popular stock in this group but hedge fund interest is still above average. We are in an increasing interest rate environment and historically financial stocks do better in this environment. That’s why we expect financial stocks like Visa and JP Morgan to outperform the S&P 500 Index that is now dominated by overpriced technology stocks that are likely to underperform as cost of capital creeps up.