For the first few years of its existence, JetBlue Airways Corporation (NASDAQ:JBLU) was the darling of the airline industry. While it had the prices of a low-cost carrier (compared to the lumbering legacy carriers of the day), it actually offered more amenities than most airlines, such as free satellite TV at every seat. Unfortunately, as legacy competitors improved their cost structures and oil prices rose, JetBlue’s advantage shrank.

The tipping point was a wave of excruciating delays and flight cancellations — caused by poor operational practices — around Valentine’s Day of 2007. Over the course of 2007, JetBlue’s stock fell into a rut that it has been stuck in for more than six years. 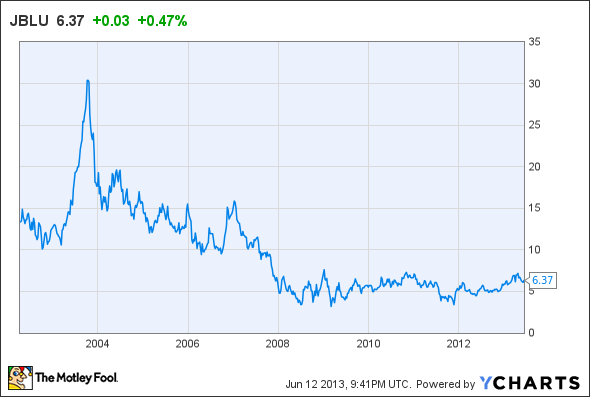 However, brighter days may be ahead for JetBlue Airways Corporation (NASDAQ:JBLU). Hurricane Sandy and its aftereffects hurt JetBlue’s profitability in Q4 2012 and Q1 2013, but now JetBlue has moved past that tragedy for good. Moreover, after the company posted a steep 9% decline in unit revenue during April — largely due to the calendar shift of Easter and Passover into March compared to 2012 — revenue momentum picked up again in May.

Growing profitably
JetBlue Airways Corporation (NASDAQ:JBLU) is already one of the largest carriers in the New York area, where it competes heavily with Delta Air Lines, Inc. (NYSE:DAL), United Continental Holdings Inc (NYSE:UAL), and AMR‘s American Airlines. However, the company has been diversifying its operations, and has become the largest carrier in Boston and San Juan. JetBlue’s growth is primarily concentrated in those two markets now.

JetBlue Airways Corporation (NASDAQ:JBLU)’s strong positioning in New York, Boston, and San Juan allowed it to post a 1% increase in unit revenue last month even though capacity grew by 9%. That is particularly impressive because among the five largest airlines in the country, only Delta Air Lines, Inc. (NYSE:DAL) managed to post unit revenue growth in May (and just 0.5% growth at that), despite much smaller capacity increases.

While JetBlue Airways Corporation (NASDAQ:JBLU) expects flat unit revenue in June, this would still be a good result in light of the carrier’s growth rate. New routes in the airline industry tend to take two to three years to reach peak profitability, and so growth tends to depress unit revenue in the short term (until the routes fully mature).

Improving returns
While JetBlue Airways Corporation (NASDAQ:JBLU) has always been a growth company, it has recently begun to lag the airline industry in terms of value creation. As a result, JetBlue shares trade right around book value. However, the company is focused on improving its return on invested capital by at least one percentage point each year.