Ten years ago, JetBlue Airways Corporation (NASDAQ:JBLU) was an innovative airline start-up that could do no wrong in Wall Street’s eyes. Since then, the company has lost much of its luster, particularly as fuel prices have skyrocketed. 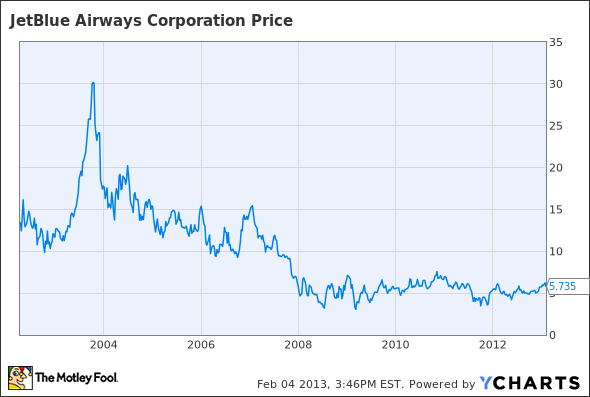 Compounding JetBlue’s woes, legacy competitors such as Delta Air Lines, Inc. (NYSE:DAL) and United Continental Holdings Inc (NYSE:UAL) have grown their networks through mergers and cut costs in bankruptcy. Meanwhile, lower cost competitors such as Spirit Airlines Incorporated (NASDAQ:SAVE) have grown and undercut JetBlue on price. Indeed, Spirit has stated that JetBlue’s costs are 23% higher than its own.

Reaching a bottom
However, JetBlue may have finally bottomed out. Its once-lofty P/E has come down to a more reasonable level; the company trades at less than 10 times expected 2013 earnings of $0.60. JetBlue was disproportionately hurt by Hurricane Sandy last quarter, which explains its Q4 profit decline. However, that tragedy should have no long-term impact on JetBlue’s results.

JetBlue’s turnaround is being driven by its maturation. Ironically, JetBlue is poised to profit by acting more like Delta, United, and the other legacy carriers it was disrupting a decade ago. It is focusing its resources on markets where it can achieve the No. 1 position, rather than competing everywhere.

For example, in Boston, JetBlue recently became the largest carrier, and has seen corporate share gains as a result. The company is focusing much of its current growth on Boston, in order to solidify its dominance there. In San Juan, Puerto Rico, JetBlue has grown its presence as American Airlines has dismantled its former hub. With American cutting the rest of its regional service from San Juan at the end of March, JetBlue is backfilling some of those routes, becoming the clear market leader in the process.

A winning formula
As JetBlue has matured, it has eschewed the rapid growth that was typical in its early years. This has helped the company’s revenue performance, as new routes tend to underperform established ones. The downside to slower growth is that it tends to put pressure on costs as the fleet ages and employees gain seniority. However, JetBlue is managing its costs very well; in 2013, the company plans to grow capacity by 5.5%-7.5%, while cost per available seat mile (excluding fuel) will increase by just 1%-3% for the full year.