Is Jerash Holdings (US), Inc. (JRSH) A Good Stock To Buy?

Is Jerash Holdings (US), Inc. (NASDAQ:JRSH) a good stock to buy right now? We at Insider Monkey like to examine what billionaires and hedge funds think of a company before spending days of research on it. Given their 2 and 20 payment structure, hedge funds have more incentives and resources than the average investor. The funds have access to expert networks and get tips from industry insiders. They also employ numerous Ivy League graduates and MBAs. Like everyone else, hedge funds perform miserably at times, but their consensus picks have historically outperformed the market after risk adjustments.

Jerash Holdings (US), Inc. (NASDAQ:JRSH) was in 3 hedge funds’ portfolios at the end of September. JRSH has seen an increase in hedge fund sentiment of late. There were 1 hedge funds in our database with JRSH positions at the end of the previous quarter. Our calculations also showed that JRSH isn’t among the 30 most popular stocks among hedge funds.

Unlike the largest US hedge funds that are convinced Dow will soar past 40,000 or the world’s most bearish hedge fund that’s more convinced than ever that a crash is coming, our long-short investment strategy doesn’t rely on bull or bear markets to deliver double digit returns. We only rely on the best performing hedge funds‘ buy/sell signals. We’re going to view the key hedge fund action surrounding Jerash Holdings (US), Inc. (NASDAQ:JRSH).

What have hedge funds been doing with Jerash Holdings (US), Inc. (NASDAQ:JRSH)? 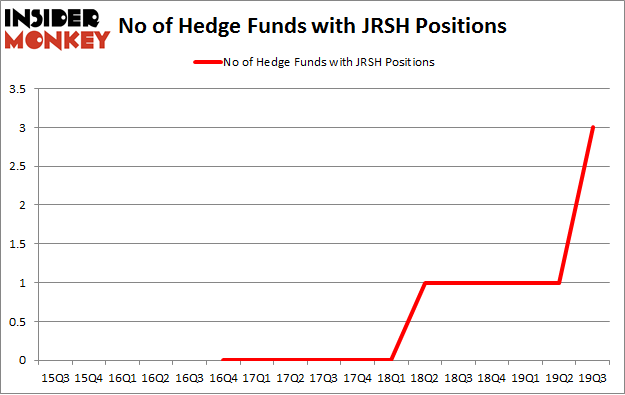 Among these funds, Royce & Associates held the most valuable stake in Jerash Holdings (US), Inc. (NASDAQ:JRSH), which was worth $1.1 million at the end of the third quarter. On the second spot was Millennium Management which amassed $0.2 million worth of shares. Renaissance Technologies was also very fond of the stock, becoming one of the largest hedge fund holders of the company. In terms of the portfolio weights assigned to each position Royce & Associates allocated the biggest weight to Jerash Holdings (US), Inc. (NASDAQ:JRSH), around 0.01% of its portfolio. Millennium Management is also relatively very bullish on the stock, earmarking 0.0004 percent of its 13F equity portfolio to JRSH.

As industrywide interest jumped, specific money managers were breaking ground themselves. Millennium Management, managed by Israel Englander, assembled the most valuable position in Jerash Holdings (US), Inc. (NASDAQ:JRSH). Millennium Management had $0.2 million invested in the company at the end of the quarter. Renaissance Technologies also made a $0.1 million investment in the stock during the quarter.

As you can see these stocks had an average of 7.5 hedge funds with bullish positions and the average amount invested in these stocks was $24 million. That figure was $1 million in JRSH’s case. VBI Vaccines, Inc. (NASDAQ:VBIV) is the most popular stock in this table. On the other hand J. Jill, Inc. (NYSE:JILL) is the least popular one with only 6 bullish hedge fund positions. Compared to these stocks Jerash Holdings (US), Inc. (NASDAQ:JRSH) is even less popular than JILL. Hedge funds dodged a bullet by taking a bearish stance towards JRSH. Our calculations showed that the top 20 most popular hedge fund stocks returned 34.7% in 2019 through November 22nd and outperformed the S&P 500 ETF (SPY) by 8.5 percentage points. Unfortunately JRSH wasn’t nearly as popular as these 20 stocks (hedge fund sentiment was very bearish); JRSH investors were disappointed as the stock returned -10% during the fourth quarter (through 11/22) and underperformed the market. If you are interested in investing in large cap stocks with huge upside potential, you should check out the top 20 most popular stocks among hedge funds as 70 percent of these stocks already outperformed the market so far in Q4.

Hedge Funds Are Warming Up To Parke Bancorp, Inc. (PKBK)
Monthly Newsletter Strategy
Download a free copy of our newsletter and see the details inside!
Hedge Fund Resource Center
Related News
Hedge Funds Have Never Been This Bullish On Ituran Location and Control Ltd. (ITRN) Here’s What Hedge Funds Think About Ituran Location and Control Ltd. (US) (ITRN) 10 Countries That Spend the Most on Advertising 10 Countries That Spend The Most on Military 11 Countries That Consume the Most Ice Cream Cisco Systems, Inc. (CSCO)’s Plan To Elude NSA Intercepts Is To Ship To Empty Houses The 10 Most Important International Conflicts in 2014 10 Tinder Bio Examples For Serious Relationships Top 5 Best Smartphones With Removable Battery In 2019 10 Easiest Popular Songs to Play on Piano
Billionaire Hedge Funds