Is JELD-WEN Holding, Inc. (JELD) A Good Stock To Buy?

JELD-WEN Holding, Inc. (NYSE:JELD) shares haven’t seen a lot of action during the third quarter. Overall, hedge fund sentiment was unchanged. The stock was in 13 hedge funds’ portfolios at the end of the third quarter of 2018. At the end of this article we will also compare JELD to other stocks including Nuveen Quality Municipal Income Fund (NYSE:NAD), Worthington Industries, Inc. (NYSE:WOR), and Aerojet Rocketdyne Holdings Inc (NYSE:AJRD) to get a better sense of its popularity.

How have hedgies been trading JELD-WEN Holding, Inc. (NYSE:JELD)? 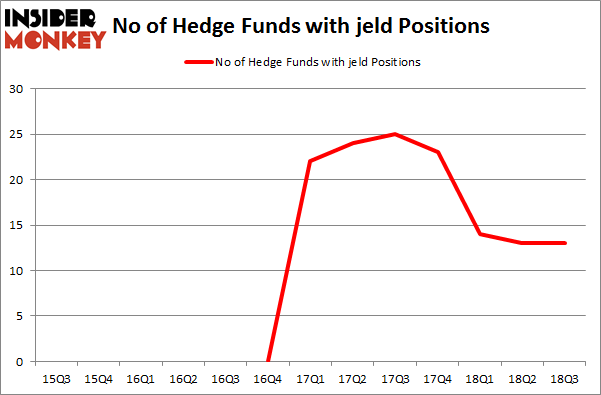 Of the funds tracked by Insider Monkey, Jonathan Auerbach’s Hound Partners has the most valuable position in JELD-WEN Holding, Inc. (NYSE:JELD), worth close to $202.7 million, amounting to 4.7% of its total 13F portfolio. On Hound Partners’s heels is Pzena Investment Management, managed by Richard S. Pzena, which holds a $169.4 million position; the fund has 0.8% of its 13F portfolio invested in the stock. Some other peers that hold long positions consist of John Smith Clark’s Southpoint Capital Advisors, Richard Barrera’s Roystone Capital Partners and Thomas Ellis and Todd Hammer’s North Run Capital.

Judging by the fact that JELD-WEN Holding, Inc. (NYSE:JELD) has experienced declining sentiment from the entirety of the hedge funds we track, it’s safe to say that there is a sect of hedge funds who sold off their entire stakes in the third quarter. Interestingly, Anthony Joseph Vaccarino’s North Fourth Asset Management dropped the biggest position of the 700 funds tracked by Insider Monkey, comprising close to $8.4 million in stock, and John Overdeck and David Siegel’s Two Sigma Advisors was right behind this move, as the fund dumped about $0.7 million worth. These bearish behaviors are intriguing to say the least, as aggregate hedge fund interest stayed the same (this is a bearish signal in our experience).

As you can see these stocks had an average of 13.75 hedge funds with bullish positions and the average amount invested in these stocks was $174 million. That figure was $448 million in JELD’s case. Dave & Buster’s Entertainment, Inc. (NASDAQ:PLAY) is the most popular stock in this table. On the other hand Nuveen Quality Municipal Income Fund (NYSE:NAD) is the least popular one with only 4 bullish hedge fund positions. JELD-WEN Holding, Inc. (NYSE:JELD) is not the least popular stock in this group but hedge fund interest is still below average. This is a slightly negative signal and we’d rather spend our time researching stocks that hedge funds are piling on. In this regard PLAY might be a better candidate to consider a long position.