Investing in small cap stocks has historically been a way to outperform the market, as small cap companies typically grow faster on average than the blue chips. That outperformance comes with a price, however, as there are occasional periods of higher volatility. The last 8 months is one of those periods, as the Russell 2000 ETF (IWM) has underperformed the larger S&P 500 ETF (SPY) by nearly 9 percentage points. Given that the funds we track tend to have a disproportionate amount of their portfolios in smaller cap stocks, they have seen some volatility in their portfolios too. Actually their moves are potentially one of the factors that contributed to this volatility. In this article, we use our extensive database of hedge fund holdings to find out what the smart money thinks of Jefferies Financial Group Inc. (NYSE:JEF).

Jefferies Financial Group Inc. (NYSE:JEF) was in 35 hedge funds’ portfolios at the end of March. JEF has seen a decrease in support from the world’s most elite money managers in recent months. There were 36 hedge funds in our database with JEF positions at the end of the previous quarter. Our calculations also showed that JEF isn’t among the 30 most popular stocks among hedge funds.

Heading into the second quarter of 2019, a total of 35 of the hedge funds tracked by Insider Monkey were bullish on this stock, a change of -3% from the fourth quarter of 2018. The graph below displays the number of hedge funds with bullish position in JEF over the last 15 quarters. With the smart money’s sentiment swirling, there exists a few key hedge fund managers who were increasing their stakes significantly (or already accumulated large positions). 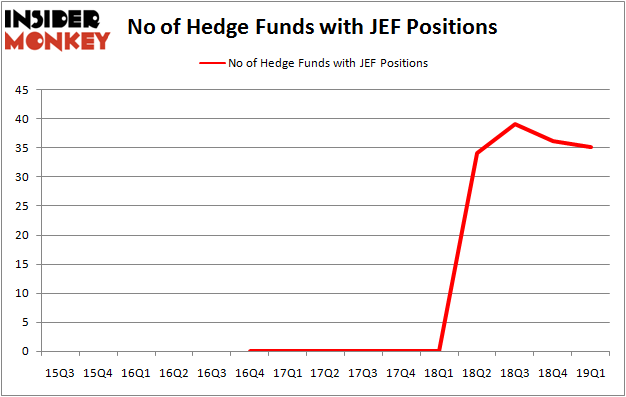 According to Insider Monkey’s hedge fund database, Robert Rodriguez and Steven Romick’s First Pacific Advisors LLC has the number one position in Jefferies Financial Group Inc. (NYSE:JEF), worth close to $384.4 million, amounting to 3.4% of its total 13F portfolio. Sitting at the No. 2 spot is Arlington Value Capital, managed by Allan Mecham and Ben Raybould, which holds a $77.9 million position; 5.5% of its 13F portfolio is allocated to the stock. Remaining peers that are bullish consist of Amit Wadhwaney’s Moerus Capital Management, Ken Griffin’s Citadel Investment Group and Scott Wallace’s Wallace Capital Management.

Judging by the fact that Jefferies Financial Group Inc. (NYSE:JEF) has experienced bearish sentiment from the aggregate hedge fund industry, logic holds that there is a sect of hedgies who sold off their entire stakes last quarter. Interestingly, Michael M. Rothenberg’s Moab Capital Partners sold off the biggest position of the “upper crust” of funds monitored by Insider Monkey, valued at about $6 million in stock. Jeffrey Talpins’s fund, Element Capital Management, also sold off its stock, about $3 million worth. These moves are intriguing to say the least, as total hedge fund interest fell by 1 funds last quarter.

As you can see these stocks had an average of 22.5 hedge funds with bullish positions and the average amount invested in these stocks was $645 million. That figure was $669 million in JEF’s case. Allison Transmission Holdings Inc (NYSE:ALSN) is the most popular stock in this table. On the other hand Companhia Siderurgica Nacional (NYSE:SID) is the least popular one with only 8 bullish hedge fund positions. Compared to these stocks Jefferies Financial Group Inc. (NYSE:JEF) is more popular among hedge funds. Our calculations showed that top 20 most popular stocks among hedge funds returned 1.9% in Q2 through May 30th and outperformed the S&P 500 ETF (SPY) by more than 3 percentage points. Unfortunately JEF wasn’t nearly as popular as these 20 stocks and hedge funds that were betting on JEF were disappointed as the stock returned -2.8% during the same period and underperformed the market. If you are interested in investing in large cap stocks with huge upside potential, you should check out the top 20 most popular stocks among hedge funds as 13 of these stocks already outperformed the market in Q2.