Jack Henry & Associates, Inc. (NASDAQ:JKHY) has seen an increase in hedge fund interest recently. JKHY was in 14 hedge funds’ portfolios at the end of September. There were 12 hedge funds in our database with JKHY positions at the end of the previous quarter. Our calculations also showed that jkhy isn’t among the 30 most popular stocks among hedge funds.

What does the smart money think about Jack Henry & Associates, Inc. (NASDAQ:JKHY)? 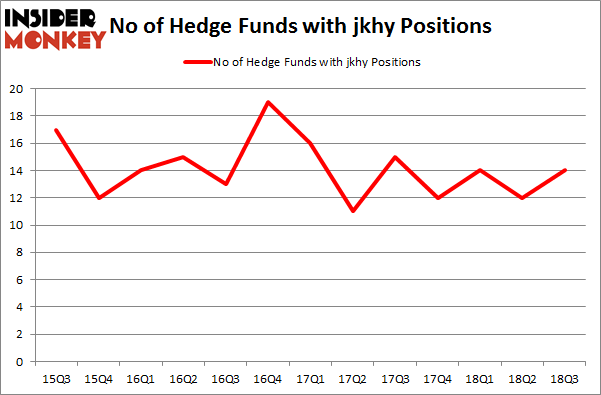 Of the funds tracked by Insider Monkey, Peter Rathjens, Bruce Clarke and John Campbell’s Arrowstreet Capital has the most valuable position in Jack Henry & Associates, Inc. (NASDAQ:JKHY), worth close to $109.7 million, comprising 0.2% of its total 13F portfolio. Coming in second is Chuck Royce of Royce & Associates, with a $52.3 million position; 0.4% of its 13F portfolio is allocated to the stock. Some other professional money managers that hold long positions contain Cliff Asness’s AQR Capital Management, Noam Gottesman’s GLG Partners and Greg Poole’s Echo Street Capital Management.

As one would reasonably expect, some big names have been driving this bullishness. Balyasny Asset Management, managed by Dmitry Balyasny, assembled the most valuable position in Jack Henry & Associates, Inc. (NASDAQ:JKHY). Balyasny Asset Management had $0.9 million invested in the company at the end of the quarter. Matthew Hulsizer’s PEAK6 Capital Management also initiated a $0.8 million position during the quarter.

As you can see these stocks had an average of 24.25 hedge funds with bullish positions and the average amount invested in these stocks was $1.05 billion. That figure was $272 million in JKHY’s case. HEICO Corporation (NYSE:HEI) is the most popular stock in this table. On the other hand Cenovus Energy Inc (NYSE:CVE) is the least popular one with only 13 bullish hedge fund positions. Jack Henry & Associates, Inc. (NASDAQ:JKHY) is not the least popular stock in this group but hedge fund interest is still below average. This is a slightly negative signal and we’d rather spend our time researching stocks that hedge funds are piling on. In this regard HEI might be a better candidate to consider a long position.