Shares of J.C. Penney Company, Inc. (NYSE:JCP) plunged to a multiyear low of $13.55 in early April, following the announcement that CEO Ron Johnson had been replaced by his predecessor, Mike Ullman. The decision to remove Johnson dispelled any lingering hopes that his turnaround plan for the company would succeed. Moreover, the choice of Ullman — who had been pushed out less than two years before because of the company’s underperformance — was not particularly inspiring.

However, J.C. Penney Company, Inc. (NYSE:JCP) shares have since rallied more than 35% from that early April low, closing at $18.62 on Tuesday. 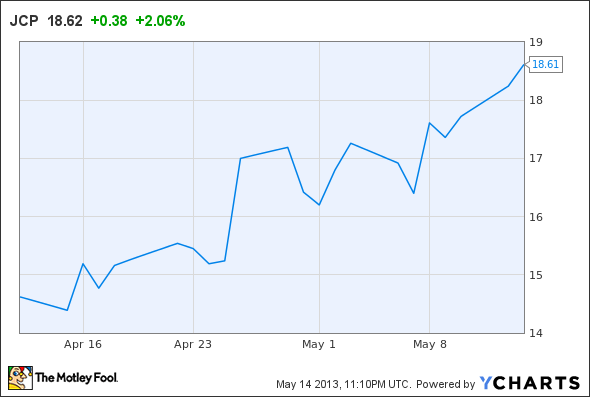 Investors shouldn’t be fooled by the wild short-term fluctuations in J.C. Penney’s stock price. The company hasn’t done anything to suggest that it will return to profitability in the foreseeable future.

This week, J.C. Penney introduced a new commercial, thanking those customers who came back over the past two weeks. Indeed, Cleveland Research released a report on Monday claiming that J.C. Penney had achieved significant improvement in sales and traffic this month. While it’s good that people are returning to J.C. Penney Company, Inc. (NYSE:JCP), it won’t necessarily improve profits, because the reintroduction of big discounts and coupons could significantly depress the company’s gross margin.

Doorbusters!
Last weekend, J.C. Penney ran a Mother’s Day sale and promoted discounts of as much as 40% as “doorbusters” (a term usually reserved for Black Friday weekend). The combination of bigger deals, more newspaper advertising, and the recent TV ads apparently brought more customers into J.C. Penney stores. However, investors should remember that J.C. Penney recently disclosed that Q1 revenue dropped by 16.4%, following a 20.1% decline in Q1 FY12. In other words, the bar for increased traffic and sales is very low right now.

Furthermore, while J.C. Penney Company, Inc. (NYSE:JCP) has been raising some “everyday” prices recently to make room for discounts, the highly promotional style it’s reintroducing will affect gross margin. The impact can be offset somewhat by selling less merchandise on clearance, but the net effect will probably be negative for the time being, because J.C. Penney will need to use particularly aggressive promotions to bring back customers who have taken their business elsewhere, such as Macy’s, Inc. (NYSE:M), and The TJX Companies, Inc. (NYSE:TJX)’s T.J. Maxx and Marshalls stores.