The 700+ hedge funds and money managers tracked by Insider Monkey have already compiled and submitted their 13F filings for the second quarter, which unveil their equity positions as of September 30. We went through these filings, fixed typos and other more significant errors and identified the changes in hedge fund positions. Our extensive review of these public filings is finally over, so this article is set to reveal the smart money sentiment towards Itron, Inc. (NASDAQ:ITRI).

Itron, Inc. (NASDAQ:ITRI) has seen an increase in hedge fund interest lately. ITRI was in 17 hedge funds’ portfolios at the end of September. There were 13 hedge funds in our database with ITRI holdings at the end of the previous quarter. Our calculations also showed that itri isn’t among the 30 most popular stocks among hedge funds.

Today there are tons of formulas investors can use to size up publicly traded companies. A couple of the most useful formulas are hedge fund and insider trading activity. We have shown that, historically, those who follow the best picks of the top investment managers can outpace their index-focused peers by a very impressive margin (see the details here).

What does the smart money think about Itron, Inc. (NASDAQ:ITRI)? 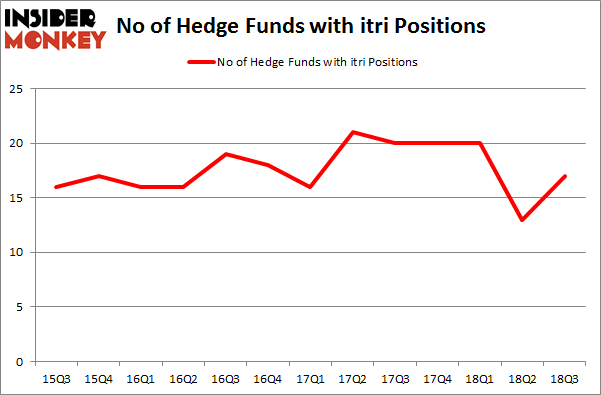 The largest stake in Itron, Inc. (NASDAQ:ITRI) was held by Scopia Capital, which reported holding $346.7 million worth of stock at the end of September. It was followed by Impax Asset Management with a $139.4 million position. Other investors bullish on the company included Marcato Capital Management, Renaissance Technologies, and Cardinal Capital.

As you can see these stocks had an average of 13 hedge funds with bullish positions and the average amount invested in these stocks was $97 million. That figure was $625 million in ITRI’s case. Moelis & Company (NYSE:MC) is the most popular stock in this table. On the other hand Apollo Commercial Real Est. Finance Inc (NYSE:ARI) is the least popular one with only 7 bullish hedge fund positions. Itron, Inc. (NASDAQ:ITRI) is not the most popular stock in this group but hedge fund interest is still above average. This is a slightly positive signal but we’d rather spend our time researching stocks that hedge funds are piling on. In this regard MC might be a better candidate to consider a long position.

Is Ferro Corporation (FOE) Going to Burn These Hedge Funds?
Monthly Newsletter Strategy
Download a free copy of our newsletter and see the details inside!
Hedge Fund Resource Center
Related News
13D Filing: Scopia Capital and Itron Inc (ITRI) 13D Filing: Scopia Capital and Itron Inc (ITRI) Are Hedge Funds Right to be So Bullish on Itron, Inc. (ITRI)? Why Are Traders Piling Into These 5 Stocks Thursday? With Small-Caps Back on Track, Here Are Impax Asset’s Favorites for Q3 Starboard Value Warns of Looming Election Contest at Insperity Inc. (NSP), Plus 3 Other Activist Moves Starboard Value Cuts Stake in RealD (RLD), Stadium Capital Buys More of This Retailer, Plus 2 Other Moves 11 Countries With The Worst Modern Music In The World The Top 5 Robo Advisor Apps of 2018 Five Reasons You Need a Day-Trading Mentor
Billionaire Hedge Funds