Is It Time to Buy Stock in The Southern Company (SO)?

The past year hasn’t been too kind to owners of The Southern Company (NYSE:SO) stock. It’s down about 7% while the market, as measured by the S&P 500, is up more than 18%. While it’s not the worst performer within its peer group, the stock is far behind NextEra Energy, Inc. (NYSE:NEE) which has performed nearly in line with the market as you can see in the following chart: 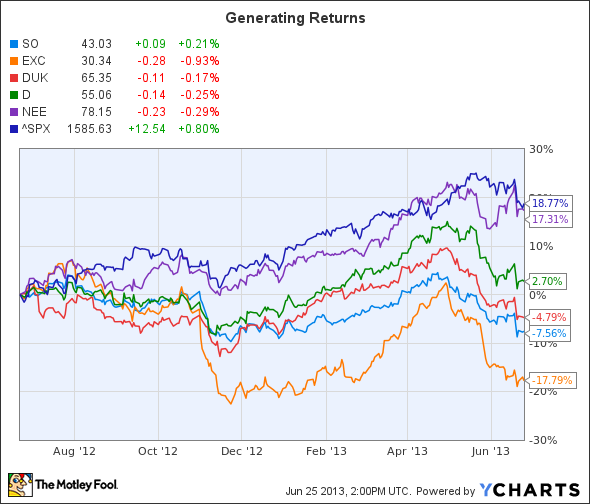 SO data by YCharts

In looking at that chart we see that Exelon (NYSE:EXC) is by far and away the worst performer. Owners of that stock can pretty much peg its underperformance on the company’s decision to cut its dividend earlier this year amid falling profits. Dividends haven’t been a problem for owners of The Southern Company (NYSE:SO)’s stock as the company recently raised the payout, marking the 12th strait year that the dividend has gone up.

As investors, before we can think about buying a stock we must first consider why others have been selling. The first place to start is to look at the generating portfolio. Here you’ll find that The Southern Company (NYSE:SO) has generating capacity of 45,740 megawatts with a portfolio mix that includes 36% coal, 45% oil and gas, 17% nuclear and 2% hydro. These assets, as the name would imply, are concentrated in the south as you can see from the following map: One thing that is noticeable off the bat is that the portfolio isn’t as “green” as top-performing NextEra Energy, Inc. (NYSE:NEE). Wind is really driving the performance at NextEra because the company is one of the world’s largest generators of wind power with more than 10,000 megawatts of installed capacity. Wind represents 57% of the total generation capacity in its energy resources business.

That’s not to say that The Southern Company (NYSE:SO) isn’t growing its clean energy generation. The company is in the process of building the first new nuclear generation units to be built in the U.S. in 30 years. Those two units, Vogtle Units 3 and 4, are scheduled to begin operations in 2017 and 2018, respectively. The only problem here is that the market isn’t all that fond of nuclear power these days, which is one reason why Exelon Corporation (NYSE:EXC)’s stock has underperformed.

The reason for this is that natural gas prices are still pretty cheap in the U.S. That’s affecting both the cost of coal and nuclear power. Cheap gas has really been driving a lot of the decisions at utilities like Duke Energy Corp (NYSE:DUK) and Dominion Resources, Inc. (NYSE:D); both making a big push to take advantage of that fuel. Duke for example is bringing natural gas generation from just 5% of its generating portfolio in 2005 all the way to 24% by 2015. That’s a big driving force behind the company’s plan to grow its earnings by 4%-6% annually through 2015.