Is It Time for an Apple Inc. (AAPL) and Research In Motion Ltd (BBRY) Pairs Trade Switch?

Pairs trading is a strategy investors can employ to maintain a relatively market neutral position while attempting to exploit mispriced stocks. The idea is to go long an undervalued stock and short an overvalued stock, with the theoretical expectation that the two will converge and mispricing will be eliminated. It’s a rather risky strategy in general, because pairs trading is inherently leveraged, the prices can diverge further, and the paper losses can add up quickly with two positions going the wrong way. 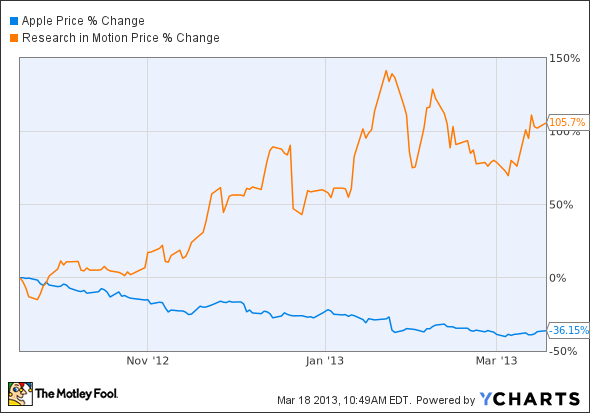 Apple (NASDAQ:AAPL) topped out at over $705 on the same day it launched the iPhone 5, but has pulled back because of negative investor sentiment surrounding its competitive prospects and investor frustration over its oversized cash position. Investor pessimism over Research In Motion Ltd (NASDAQ:BBRY) reached a fever pitch at nearly the exact same time, which is about when shares bottomed out near $6.

In January, the company proceeded to — at long last — launch its BlackBerry 10 operating system platform after years of development and delays. The success or failure of BlackBerry 10 in the coming quarters will very much make or break the company, and investors are expressing their optimism by sending shares higher.

As profitable as a short Apple (NASDAQ:AAPL) and long Research In Motion Ltd (NASDAQ:BBRY) pairs trade would have been over the past six months, is it time to switch those positions, and go long Apple and short BlackBerry?

One analyst thinks so
Growth Avenue Asset Advisors thinks that now is precisely the time to make the swap. Analyst C.K. Narayan is out with a research note recommending that investors buy Apple and sell Research In Motion Ltd (NASDAQ:BBRY).

BlackBerry needs a “blockbuster of a product” to change its direction for the long term, and overall tech reviews of the new Z10 don’t consider the Z10 a blockbuster. The new device is certainly competitive in many ways, but isn’t leapfrogging the competition, which is effectively what investors are pricing in right now.