Share Tweet Email
The New York Times Company (NYSE:NYT) is arguably the most well-known newspaper in the United States. Yet the company, as well as many of its dated and fallen industry peers, failed to capitalize on the growth of the Internet and the resulting spread of freely available news from a wide variety of sources.

Over the past decade, the New York Times has lost 80% of its market value, shedding asset after asset in a desperate bid to stay afloat. A final piece, its iconic Boston Globe newspaper and its related properties, was finally put up on sale recently – which means that the newspaper, founded in 1851, will be down to two remaining properties – its namesake newspaper and its European version, The International Herald Tribune. Is this the end of the road for the humbled New York Times, which is seemingly headed for the recycling bin, or will last ditch efforts to save the company with a paywall succeed?

The New York Times reported its fourth quarter earnings on February 7, which topped estimates on both its top and bottom lines. However, both earnings and revenue still declined from the prior year quarter.

Yet its shares immediately rallied 12% after the report. Was this optimism justified, for a company which has yet to prove that its core business is sustainable?

To grasp the desperation of The New York Times’ situation, we have to compare its top and bottom line growth to another dated media icon, The Washington Post Company (NYSE:WPO). 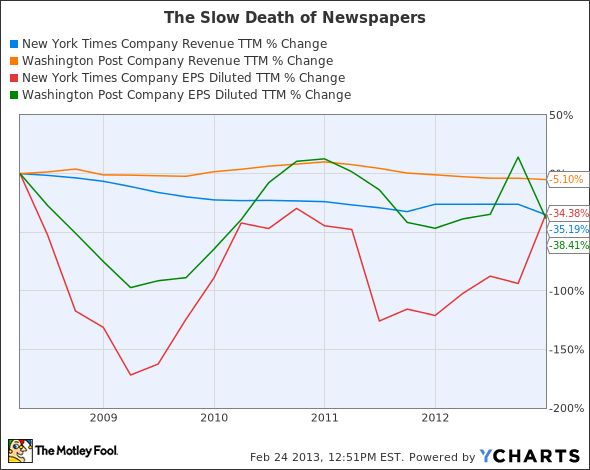 The Washington Post has outperformed The New York Times over the past five years, thanks to its ownership of six television broadcast stations and Kaplan educational services – which have helped offset losses at its print media division. Warren Buffett is also a prominent investor in the Washington Post, which has kept it relevant in the minds of investors.

The New York Times, on the other hand, relies completely on print and digital revenue. It also has a high-profile investor in its corner – Mexican telecommunications magnate Carlos Slim, the world’s richest man – who owns an estimated 8.1% of the company.

But what do Slim and Buffett, the world’s 1st and 3rd richest men respectively, see in these aging newspapers? Is it financial strength? 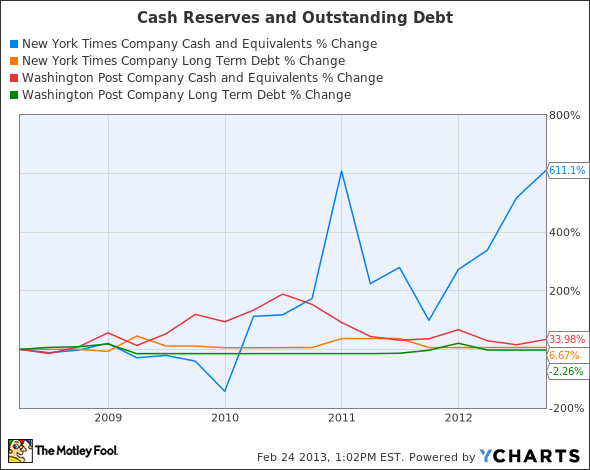 A look at The New York Times’ cash growth over the past five years reveals a surprising trend – it actually grew its cash and equivalents by 611%, ending the year with $955 million in cash.

However, most of those gains were generated by sales of its non-core assets, which included its broadcast media group (eight TV stations and two radio stations), its regional newspaper group (16 local newspapers), career search site Indeed.com, About.com, and its divestment from sports-related joint ventures. In other words, New York Times has been burning the furniture.

The New York Times has also taken losses with most of these sales. For example, it purchased About.com for $410 million in 2005, only to sell it to IAC/InteractiveCorp (NASDAQ:IACI) for $300 million.

The company is also expected to take a large loss by selling The Boston Globe, its venerable but troubled print franchise. It originally acquired The Globe for $1.1 billion in 1993. Although the company hasn’t put a price tag on The Globe yet, a local investment group once offered $35 million for The Globe in 2009, which The New York Times turned down. Back in 2009, The New York Times also did an industry survey to gauge how much The Globe was worth, and the results were grim – anything between a single dollar and $300 million.

The Boston Globe is also still bleeding cash. For 2012, it posted a 7.8% decline in ad revenue to $183 million and a 1.7% slide in circulation sales to $155.1 million. However, its paying digital subscribers rose by 8% sequentially to 28,000 – still a meager number that made little impact on the company’s top line.

“All the news that’s fit to recycle.”

The New York Times’ struggle stems from the decline of classic journalism, where highly-paid reporters were required to research, compile and write their own stories. Its threat is the rise of Google Inc (NASDAQ:GOOG) -based journalism, where content mills and blogging sites employ low-paid, anonymous writers to recycle publicly available news from sources – such as the Associated Press – with the sole intention of generating more page views, and thus more ad revenue, for their sites. TheNew York Times attempted to address this demand by buying content mill About.com, which embarrassingly turned into a failed investment that betrayed its core principles.

Internet portal sites such as Google News and Yahoo! Inc. (NASDAQ:YHOO) have also made print newspapers a relic of the past. The New York Times has struggled to successfully monetize its digital format, even though its website was only released two years after Yahoo.com, in 1996. 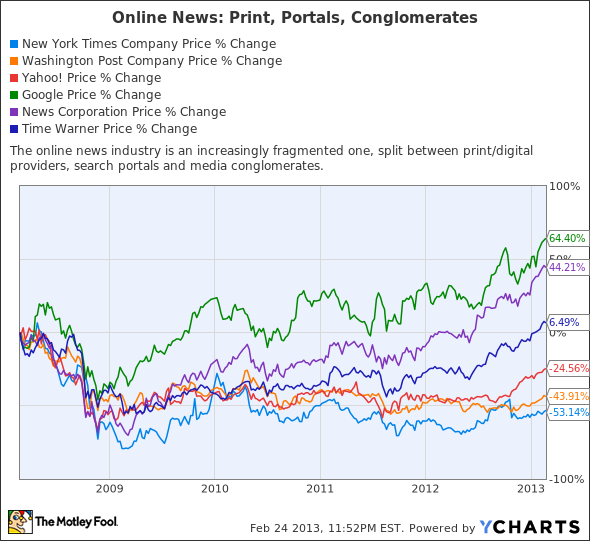 The New York Times erected a digital paywall in March 2011, in an effort to halt its rapid decline in revenue. Its paywall subscription rates range from $15 to $35, depending on the selected package. Print subscribers get full access to the paid content without any additional fees.

During the fourth quarter, The New York Times reported 668,000 paid digital subscriptions – a 13% increase from the third quarter.

Its website, nytimes.com, is still the most popular newspaper website in America, generating approximately 30 million visits monthly. While that number seems impressive, it pales in comparison to Yahoo, which logged 392 million monthly visitors, and Google and Facebook, which both reported over 1 billion visitors.

The New York Times is still stuck where it’s always been – between the past and the future. The problem is that its prospective audience is shrinking. Its remaining two properties – The New York Times and The Herald Tribune – simply cannot compete with Internet giants such as Yahoo or Google, or media conglomerates Time Warner Inc. (NYSE:TWX), The Walt Disney Company (NYSE:DIS) or Viacom, Inc. (NASDAQ:VIAB) – which control large outlets of freely available, often recycled, online news.

All these factors make The Times’ paywall look increasingly stodgy and archaic, and its declining top and bottom lines point to a sad inevitability – it is destined to devolve from an international brand back into a local paper.

The article Is it the End of Times for The New York Times? originally appeared on Fool.com and is written by Leo Sun.

Google Inc (GOOG) Sides With Microsoft Corporation (MSFT) for Once

6 Reasons Why You Should Love eBay Inc (EBAY)
Monthly Newsletter Strategy
Download a free copy of our newsletter and see the details inside!
Hedge Fund Resource Center
Billionaire Hedge Funds