Is Iovance Biotherapeutics, Inc. (IOVA) A Good Stock To Buy?

The latest 13F reporting period has come and gone, and Insider Monkey is again at the forefront when it comes to making use of this gold mine of data. We have processed the filings of the more than 700 world-class investment firms that we track and now have access to the collective wisdom contained in these filings, which are based on their September 30 holdings, data that is available nowhere else. Should you consider Iovance Biotherapeutics, Inc. (NASDAQ:IOVA) for your portfolio? We’ll look to this invaluable collective wisdom for the answer.

Is Iovance Biotherapeutics, Inc. (NASDAQ:IOVA) the right investment to pursue these days? Money managers are getting more bullish. The number of long hedge fund bets went up by 7 recently. Our calculations also showed that iova isn’t among the 30 most popular stocks among hedge funds. IOVA was in 27 hedge funds’ portfolios at the end of the third quarter of 2018. There were 20 hedge funds in our database with IOVA holdings at the end of the previous quarter. 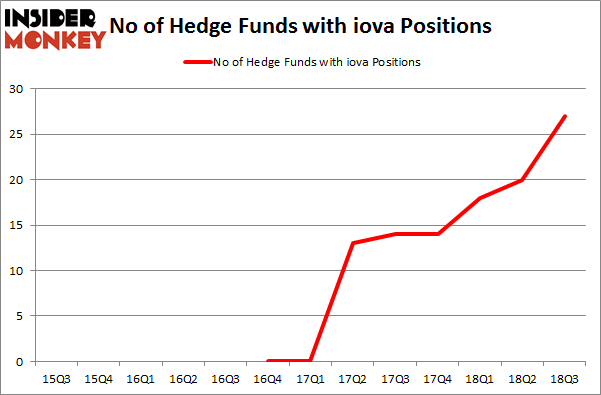 More specifically, venBio Select Advisor was the largest shareholder of Iovance Biotherapeutics, Inc. (NASDAQ:IOVA), with a stake worth $97.5 million reported as of the end of September. Trailing venBio Select Advisor was Perceptive Advisors, which amassed a stake valued at $82 million. OrbiMed Advisors, Broadfin Capital, and Farallon Capital were also very fond of the stock, giving the stock large weights in their portfolios.

As industrywide interest jumped, specific money managers were leading the bulls’ herd. Osterweis Capital Management, managed by John Osterweis, created the largest position in Iovance Biotherapeutics, Inc. (NASDAQ:IOVA). Osterweis Capital Management had $5.1 million invested in the company at the end of the quarter. Jonathan Lourie and Stuart Fiertz’s Cheyne Capital also made a $4.5 million investment in the stock during the quarter. The following funds were also among the new IOVA investors: James A. Silverman’s Opaleye Management, Ori Hershkovitz’s Nexthera Capital, and Vishal Saluja and Pham Quang’s Endurant Capital Management.

As you can see these stocks had an average of 15.25 hedge funds with bullish positions and the average amount invested in these stocks was $94 million. That figure was $512 million in IOVA’s case. Renewable Energy Group Inc (NASDAQ:REGI) is the most popular stock in this table. On the other hand Live Oak Bancshares Inc (NASDAQ:LOB) is the least popular one with only 8 bullish hedge fund positions. Compared to these stocks Iovance Biotherapeutics, Inc. (NASDAQ:IOVA) is more popular among hedge funds. Considering that hedge funds are fond of this stock in relation to its market cap peers, it may be a good idea to analyze it in detail and potentially include it in your portfolio.