Ensemble Capital recently released its Q3 2020 Investor Letter, a copy of which you can download here. The fund posted a return of 11.60% for the third quarter, outperforming its benchmark, the S&P 500 Index which returned 8.93% in the same quarter. You should check out Ensemble Fund’s top 5 stock picks for investors to buy right now, which could be the biggest winners of this year.

We describe this combination of person and machine as the “Bionic Surgeon” because of the phenomenal “superhuman” capabilities Intuitive’s technologies bring to bear, enabling enhanced vision and more precise, tremor free articulation and navigation within the patient’s body.

In the typical surgery we can picture a surgeon leaning over a patient and using a scalpel to first make an incision, then cutting across to create a 6” or longer opening to gain access to a targeted area of the patient’s body.

This “open surgery” procedure literally exposes the patient to a host of risks that are normally protected against by the skin barrier and necessitates time for the person to heal and return to normal life. These include the risks and costs of infection, blood loss, extended length of hospital stays and readmission risk, recovery time and pain, as well as permanent scarring.

In contrast, minimally invasive surgery (MIS) is a surgical procedure that tries to minimize exposure by making small incisions into which a surgeon can insert tools while leaving the body much less exposed, reducing risk and recovery times. This is why surgeons will try to use MIS as often as they safely can as an alternative to open surgery.

With the da Vinci robotic surgical system, the system’s cart with tools attached to the robotic arms hovers over the patient while the surgeon can manipulate them comfortably seated off to the side at the surgical console. There she is immersed in the magnified 3D high-definition imaging scope while very precisely manipulating the robotic arms and instruments of the robotic patient cart with her fingers, hands, and feet in an “intuitive” way – features enabled by the decades of technological development at Intuitive. Visualization also goes beyond just magnifying human vision to even increasing the range of vision using wavelengths beyond visible light, helping to contrast among structures using its Firefly technology.

The net result of this is that the da Vinci system allows surgeons to take MIS beyond the limitations of traditional laparoscopic tools and really brings it into the realm of more complex surgeries that would typically require open surgery to perform.

The first da Vinci system got FDA approval in 2000 for use in general laparoscopic surgery. It initially found product-market fit in two procedure categories, radical prostatectomy, and malignant hysterectomy, where it enabled these open surgeries to convert to MIS. The adoption was very fast, taking only a decade for open surgery to give way to MIS as the “standard of care.” A majority of radical prostatectomy and malignant hysterectomy surgical procedures in the US are now performed on the da Vinci system.

The 4th generation Xi, with its improved features and capabilities, allowed for broader adoption in the general surgical procedure categories, as we’ve recently seen across hernia, colorectal, and cholecystectomy procedures. As a result, da Vinci procedures scaled from just 30,000 in 2005 to over 1.2 million in 2019 while Intuitive’s market cap has gone from $4 billion to $80 billion!

The broader application of robotic surgery to general surgery has increased the use of the da Vinci system to a larger number of doctors across more procedure categories.

There are now tens of thousands of surgeons trained and experienced on the da Vinci platform, which is far and away the de facto leader in the soft tissue robotically-assisted surgical market, with new medical school residents trained on da Vinci systems joining the ranks of practicing surgeons every year.

Despite the 1.2 million procedures in 2019, we see this point as only having crossed the tipping point of the adoption curve. Market penetration is still in the mid to low single digit range while the vast majority of surgical procedures remain open surgeries.

One of the most intriguing things we discovered in our research on Intuitive was the relationship it has built with surgeons in the field and their influence on how Intuitive invests in development of new da Vinci systems, capabilities and tools. The adoption of da Vinci has been on a procedure by procedure basis. Intuitive works on incorporating new technologies and learnings from the field that it believes will enhance the safety, utility, and value of the system. As new capabilities are introduced, intrepid, early adopter surgeons will try them in their practices in new procedure categories. When they find a fit, they share feedback with Intuitive and push it to develop the category appropriate tools to widen the systems use for it.

Growing use of advanced instruments and broader procedure adoption are the result of this powerful feedback loop between practitioner, innovator, and adoption, which demonstrates to us the enthusiasm among customers and the win-win nature of Intuitive’s shared benefits relationship with them.

Given the magnitude of growth and increasing adoption of da Vinci in the market, competitors have taken note and are busy developing their first-generation systems. Some of these competitors like Johnson & Johnson and Medtronic, are also seeing the traditional laparoscopic tools businesses being impacted in general surgery and are responding from a defensive position.

However, the bar for entry is high given the years of experience surgeons have invested in da Vinci, the decades of development, refinement, and learnings Intuitive has designed into its 4th generation da Vinci system encompassing over 7 million cumulative procedures, the continued innovation and commercialization engine it continues to invest in, and its nearly 6,000 robotic systems installed and supported globally.

In fact, Intuitive has been pressing its advantage with its innovation and commercialization engines as its seen broader market acceptance for its robotic surgical systems. R&D spending has tripled over the past five years (a 24% annualized growth rate) as it views the market being at an early stage of penetration, just as we do.

We believe this management team understands the most important value creation levers they possess, and they are pressing on them appropriately to bring that value creation to fruition. This not only extends its growth runway but also widens its moat vis-à-vis new entrants down the road.

We would be remiss if we did not highlight the powerful culture the team at Intuitive has built at the company around its mission. As CEO Gary Guthart explains it in nearly every quarterly earnings call (this quote from the Q2 2020 call):

“We continue to believe there is a substantial and durable opportunity to fundamentally improve surgery and acute interventions. Our teams continue to work closely with hospitals, physicians and care teams in pursuit of what our customers have termed their quadruple aim: better, more predictable patient outcomes, better experiences for patients, better experiences for their care teams and, ultimately, a lower total cost of care. We believe value creation in surgery and acute care is foundationally human. It flows from respect for and understanding of patients and care teams, their needs and their environment.”

This ethos aligns well with OUR VIEW that the US healthcare industry is on an unsustainable economic path, already capturing nearly 20% of GDP, with per capita spending measuring the highest in the developed world, yet delivering subpar outcomes in life expectancy and quality. So, our focus in this sector is to invest in companies whose mission and economics are aligned with reducing cost and improving outcomes, which we believe Intuitive fits as does our only other portfolio holding in the sector, Masimo.” 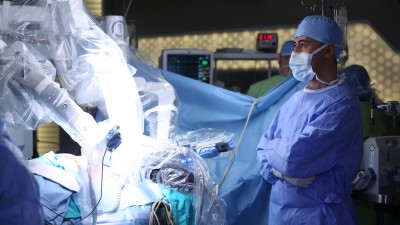 At Insider Monkey we scour multiple sources to uncover the next great investment idea. For example, Federal Reserve has been creating trillions of dollars electronically to keep the interest rates near zero. We believe this will lead to inflation and boost real estate prices. So, we recommended this real estate stock to our monthly premium newsletter subscribers after its stock price crashed. We go through lists like the 10 most profitable companies in the world to pick the best large-cap stocks to buy. Even though we recommend positions in only a tiny fraction of the companies we analyze, we check out as many stocks as we can. We read hedge fund investor letters and listen to stock pitches at hedge fund conferences. You can subscribe to our free enewsletter below to receive our stories in your inbox:

Should I Buy Fluidigm Corporation (FLDM)?

Hedge Funds Are Getting Bullish On M.D.C. Holdings, Inc. (MDC)

Hedge Funds Don’t Like The Macerich Company (MAC) Much

Hedge Funds Are Coming Back To Green Plains Inc. (GPRE)?