Is Interpublic Group of Companies Inc (IPG) A Good Stock To Buy?

Interpublic Group of Companies Inc (NYSE:IPG) shares haven’t seen a lot of action during the third quarter. Overall, hedge fund sentiment was unchanged. The stock was in 16 hedge funds’ portfolios at the end of September. At the end of this article we will also compare IPG to other stocks including Sun Communities Inc (NYSE:SUI), East West Bancorp, Inc. (NASDAQ:EWBC), and PagSeguro Digital Ltd. (NYSE:PAGS) to get a better sense of its popularity.

According to most traders, hedge funds are assumed to be unimportant, outdated financial vehicles of the past. While there are more than 8,000 funds in operation today, Our researchers look at the crème de la crème of this group, about 700 funds. These money managers administer the lion’s share of the smart money’s total capital, and by following their matchless picks, Insider Monkey has spotted various investment strategies that have historically outstripped the broader indices. Insider Monkey’s flagship hedge fund strategy exceeded the S&P 500 index by 6 percentage points per annum since its inception in May 2014 through early November 2018. We were able to generate large returns even by identifying short candidates. Our portfolio of short stocks lost 24% since February 2017 (through December 3rd) even though the market was up nearly 23% during the same period. We just shared a list of 11 short targets in our latest quarterly update.

We’re going to take a look at the key hedge fund action regarding Interpublic Group of Companies Inc (NYSE:IPG).

What does the smart money think about Interpublic Group of Companies Inc (NYSE:IPG)? 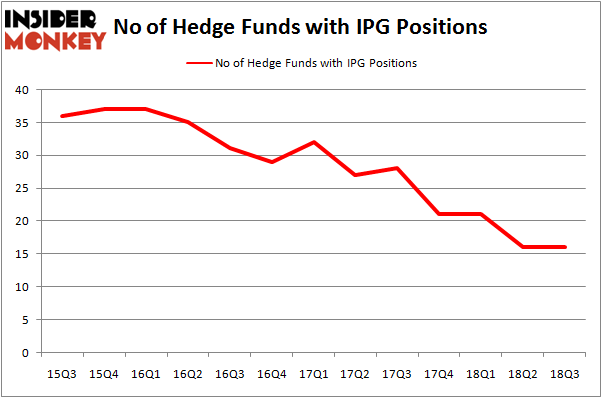 When looking at the institutional investors followed by Insider Monkey, Richard S. Pzena’s Pzena Investment Management has the largest position in Interpublic Group of Companies Inc (NYSE:IPG), worth close to $381.8 million, amounting to 1.9% of its total 13F portfolio. The second largest stake is held by Ariel Investments, managed by John W. Rogers, which holds a $168.7 million position; 1.9% of its 13F portfolio is allocated to the company. Remaining peers that hold long positions include Ken Griffin’s Citadel Investment Group, Mario Gabelli’s GAMCO Investors and Israel Englander’s Millennium Management.

Because Interpublic Group of Companies Inc (NYSE:IPG) has witnessed a decline in interest from the smart money, it’s safe to say that there exists a select few hedgies who sold off their positions entirely heading into Q3. Intriguingly, Brian Ashford-Russell and Tim Woolley’s Polar Capital sold off the biggest stake of the 700 funds monitored by Insider Monkey, worth an estimated $32.8 million in stock, and Jim Simons’s Renaissance Technologies was right behind this move, as the fund said goodbye to about $23.8 million worth. These transactions are intriguing to say the least, as aggregate hedge fund interest stayed the same (this is a bearish signal in our experience).

As you can see these stocks had an average of 26.25 hedge funds with bullish positions and the average amount invested in these stocks was $716 million. That figure was $774 million in IPG’s case. PagSeguro Digital Ltd. (NYSE:PAGS) is the most popular stock in this table. On the other hand Camden Property Trust (NYSE:CPT) is the least popular one with only 14 bullish hedge fund positions. Interpublic Group of Companies Inc (NYSE:IPG) is not the least popular stock in this group but hedge fund interest is still below average. This is a slightly negative signal and we’d rather spend our time researching stocks that hedge funds are piling on. In this regard PAGS might be a better candidate to consider a long position.

Is Insmed Incorporated (INSM) A Good Stock To Buy?
Monthly Newsletter Strategy
Download a free copy of our newsletter and see the details inside!
Hedge Fund Resource Center
Related News
Top 10 Advertising Agencies in NYC 10 Biggest Advertising Agencies In The US Is Interpublic Group of Companies Inc (IPG) a Good Stock To Buy? Hedge Funds’ Favorite Advertising Stocks Activist Fund Elliott Buys Monsanto, Lifelock, Sells Off Qlik Why Kingtone (KONE) Has Skyrocketed By 304% Today, Plus 4 Other Stocks Making Noise Are These 5 Advertising & Marketing Stocks Worth Buying? 10 Easiest Winter Olympic Sports to Qualify for 11 Countries With The Worst Modern Music In The World The Top 5 Robo Advisor Apps of 2018
Billionaire Hedge Funds