If you haven’t been paying attention to Intel Corporation (NASDAQ:INTC) stock lately, you’ve missed its run. The stock that had been beaten down below $20 has risen up to almost $24 in a short time, driven by its most recent earnings results on April 16. What did the company say? ‘I’m not dead yet.’

Intel Corporation (NASDAQ:INTC) met estimates. No surprising upside. No disappointments. Many questions still remain, but Intel was able to put a floor under their stock for the time being by showing the bears that things aren’t as bad as they think. The bulls can’t throw a party yet, but at least they can get a little more comfortable. Intel Corporation (NASDAQ:INTC) showed that the stock was a steal while it had a 4%+ dividend yield and shares rose accordingly.

Looking forward, the release of the Haswell technology in Q2 is huge for Intel. The bulls and bears have been battling over Intel Corporation (NASDAQ:INTC) for quite some time. With the Haswell release, we will begin to see more clearly what the future will bring for Intel. There are lots of other levers that Intel can pull, but none are quite as big as Haswell.

Let’s look at a few key areas specific to Intel Corporation (NASDAQ:INTC) for a temperature of how the company’s doing currently before we look too far into the future.

On the traditional valuation metrics of P/E and Price/Sales, Intel is reasonably valued at 11.9 times and 2.3 times, respectively. Unfortunately, the 11.9 P/E is at the high range of what we’ve seen from Intel over the past couple years. The Price/Sales ratio is well in-line with what you would expect from a mature, slower growth company such as Intel. 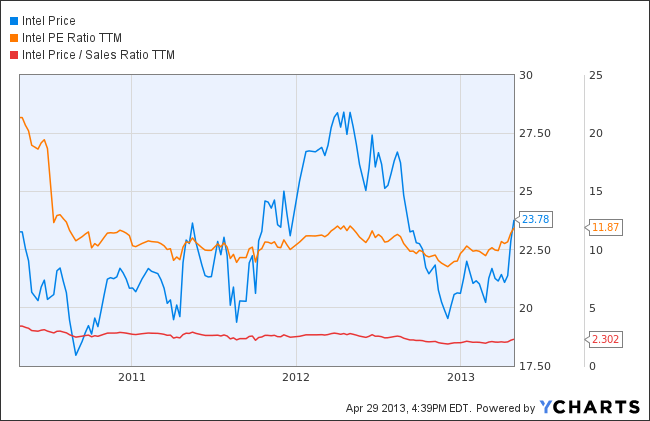 Intel is generating plenty of cash. Until recently, the cash flow from operations was trending higher. But, the recent trend downward is what concerns me and many other investors. We can debate all day long whether Intel’s huge CapEx spending is wise or not. Time will tell on that. But cash flow from operations doesn’t lie. It’s either coming in or going out. In Intel Corporation (NASDAQ:INTC)’s case, it’s still coming in just fine, but it needs to turn that trend higher again. 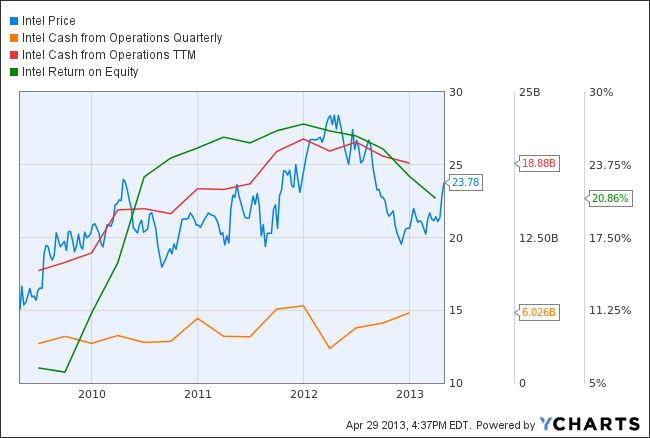 Return on Equity (ROE) is another metric that I like to follow closely because it’s difficult for a company to manipulate, especially when you look at a trend versus just one period of time. In Intel’s case, they make a very good return of over 20%. The only problem is that, again, the trend is clearly headed in the wrong direction.