Is Intel Corporation (INTC) A Good Stock To Buy According To Hedge Funds?

Insider Monkey finished processing more than 700 13F filings made by hedge funds and prominent investors. These filings show these funds’ portfolio positions as of September 30th. What do these smart investors think about Intel Corporation (NASDAQ:INTC)?

Is Intel Corporation (NASDAQ:INTC) the right investment to pursue these days? Hedge funds are taking a bearish view. The number of long hedge fund bets were trimmed by 4 lately. Our calculations also showed that INTC isn’t among the 30 most popular stocks among hedge funds. It did rank 14th among billionaires though (30 Stocks Billionaires Are Crazy About: Insider Monkey Billionaire Stock Index), being owned by the likes of Ken Fisher and Cliff Asness.

Heading into the fourth quarter of 2018, a total of 58 of the hedge funds tracked by Insider Monkey were bullish on this stock, a 6% dip from the second quarter of 2018. Below, you can check out the change in hedge fund sentiment towards INTC over the last 13 quarters. With hedgies’ capital changing hands, there exists an “upper tier” of noteworthy hedge fund managers who were adding to their stakes significantly (or already accumulated large positions). 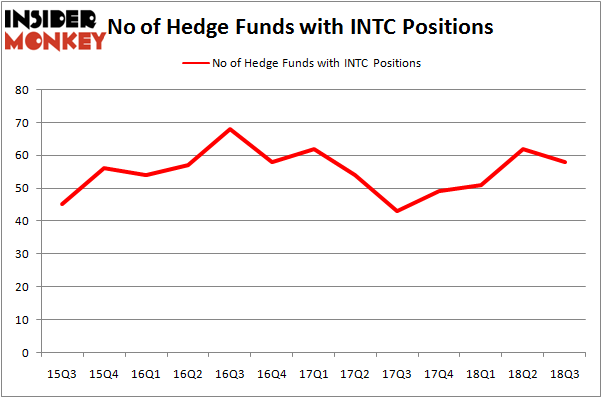 More specifically, Fisher Asset Management was the largest shareholder of Intel Corporation (NASDAQ:INTC), with a stake worth $1.14 billion reported as of the end of September. Trailing Fisher Asset Management was AQR Capital Management, which amassed a stake valued at $1.04 billion. Citadel Investment Group, Maverick Capital, and Levin Capital Strategies were also very fond of the stock, giving the stock large weights in their portfolios.

Judging by the fact that Intel Corporation (NASDAQ:INTC) has faced falling interest from the aggregate hedge fund industry, logic holds that there were a few funds who were dropping their positions entirely last quarter. At the top of the heap, Philippe Laffont’s Coatue Management cut the biggest investment of the “upper crust” of funds followed by Insider Monkey, totaling an estimated $299 million in stock. Christopher Lord’s fund, Criterion Capital, also dropped its stock, about $63.9 million worth. These moves are important to note, as total hedge fund interest dropped by 4 funds last quarter.

As you can see these stocks had an average of 38 hedge funds with bullish positions and the average amount invested in these stocks was $3.58 billion. That figure was $5.04 billion in INTC’s case. The Boeing Company (NYSE:BA) is the most popular stock in this table. On the other hand China Mobile Limited (NYSE:CHL) is the least popular one with only 15 bullish hedge fund positions. Compared to these stocks Intel Corporation (NASDAQ:INTC) is more popular among hedge funds. Considering that hedge funds are fond of this stock in relation to its market cap peers, it may be a good idea to analyze it in detail and potentially include it in your portfolio.