Before we spend countless hours researching a company, we’d like to analyze what insiders, hedge funds and billionaire investors think of the stock first. This is a necessary first step in our investment process because our research has shown that the elite investors’ consensus returns have been exceptional. In the following paragraphs, we find out what the billionaire investors and hedge funds think of Integra Lifesciences Holdings Corp (NASDAQ:IART).

Is Integra Lifesciences Holdings Corp (NASDAQ:IART) a great investment now? Investors who are in the know are buying. The number of long hedge fund positions moved up by 1 in recent months. Our calculations also showed that iart isn’t among the 30 most popular stocks among hedge funds. IART was in 19 hedge funds’ portfolios at the end of March. There were 18 hedge funds in our database with IART holdings at the end of the previous quarter.

If you’d ask most market participants, hedge funds are viewed as slow, outdated investment tools of the past. While there are more than 8000 funds with their doors open today, We hone in on the aristocrats of this group, approximately 750 funds. It is estimated that this group of investors preside over the majority of the hedge fund industry’s total capital, and by monitoring their first-class equity investments, Insider Monkey has identified numerous investment strategies that have historically outperformed the market. Insider Monkey’s flagship hedge fund strategy exceeded the S&P 500 index by around 5 percentage points annually since its inception in May 2014 through the end of May. We were able to generate large returns even by identifying short candidates. Our portfolio of short stocks lost 30.9% since February 2017 (through May 30th) even though the market was up nearly 24% during the same period. We just shared a list of 5 short targets in our latest quarterly update and they are already down an average of 11.9% in less than a couple of weeks whereas our long picks outperformed the market by 2 percentage points in this volatile 2 week period.

What have hedge funds been doing with Integra Lifesciences Holdings Corp (NASDAQ:IART)? 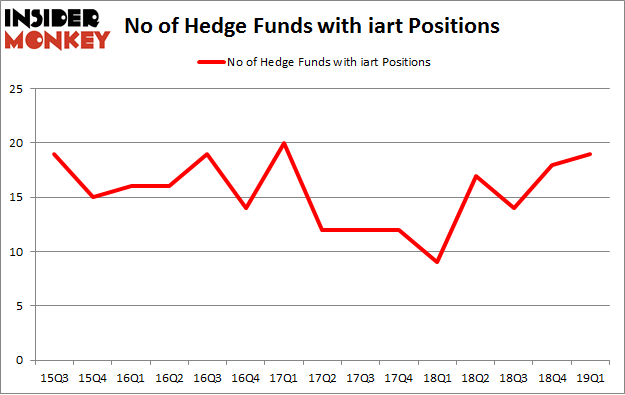 The largest stake in Integra Lifesciences Holdings Corp (NASDAQ:IART) was held by Fisher Asset Management, which reported holding $42.6 million worth of stock at the end of March. It was followed by D E Shaw with a $26.9 million position. Other investors bullish on the company included Adage Capital Management, Millennium Management, and Marshall Wace LLP.

As you can see these stocks had an average of 17.25 hedge funds with bullish positions and the average amount invested in these stocks was $860 million. That figure was $160 million in IART’s case. Ascendis Pharma A/S (NASDAQ:ASND) is the most popular stock in this table. On the other hand DCP Midstream LP (NYSE:DCP) is the least popular one with only 2 bullish hedge fund positions. Integra Lifesciences Holdings Corp (NASDAQ:IART) is not the most popular stock in this group but hedge fund interest is still above average. This is a slightly positive signal but we’d rather spend our time researching stocks that hedge funds are piling on. Our calculations showed that top 20 most popular stocks among hedge funds returned 1.9% in Q2 through May 30th and outperformed the S&P 500 ETF (SPY) by more than 3 percentage points. Unfortunately IART wasn’t nearly as popular as these 20 stocks and hedge funds that were betting on IART were disappointed as the stock returned -15.5% during the same period and underperformed the market. If you are interested in investing in large cap stocks with huge upside potential, you should check out the top 20 most popular stocks among hedge funds as 13 of these stocks already outperformed the market so far in Q2.