Is Integer Holdings Corporation (NYSE:ITGR) a good equity to bet on right now? We like to check what the smart money thinks first before doing extensive research. Although there have been several high profile failed hedge fund picks, the consensus picks among hedge fund investors have historically outperformed the market after adjusting for known risk attributes. It’s not surprising given that hedge funds have access to better information and more resources to find the latest market-moving information.

Integer Holdings Corporation (NYSE:ITGR) investors should be aware of a decrease in support from the world’s most elite money managers recently. ITGR was in 17 hedge funds’ portfolios at the end of the third quarter of 2018. There were 22 hedge funds in our database with ITGR positions at the end of the previous quarter. Our calculations also showed that ITGR isn’t among the 30 most popular stocks among hedge funds.

What have hedge funds been doing with Integer Holdings Corporation (NYSE:ITGR)?

At Q3’s end, a total of 17 of the hedge funds tracked by Insider Monkey held long positions in this stock, a change of -23% from the previous quarter. The graph below displays the number of hedge funds with bullish position in ITGR over the last 13 quarters. With hedge funds’ sentiment swirling, there exists a select group of notable hedge fund managers who were adding to their stakes significantly (or already accumulated large positions). 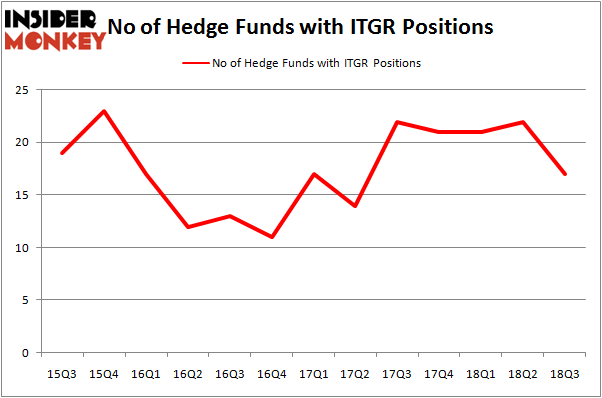 Among these funds, Fisher Asset Management held the most valuable stake in Integer Holdings Corporation (NYSE:ITGR), which was worth $98.9 million at the end of the third quarter. On the second spot was GLG Partners which amassed $33.4 million worth of shares. Moreover, Millennium Management, Point72 Asset Management, and Renaissance Technologies were also bullish on Integer Holdings Corporation (NYSE:ITGR), allocating a large percentage of their portfolios to this stock.

Since Integer Holdings Corporation (NYSE:ITGR) has faced a decline in interest from the entirety of the hedge funds we track, it’s easy to see that there is a sect of fund managers who sold off their full holdings by the end of the third quarter. Interestingly, Peter Rathjens, Bruce Clarke and John Campbell’s Arrowstreet Capital dumped the biggest position of the “upper crust” of funds followed by Insider Monkey, valued at an estimated $14.7 million in stock, and Glenn Russell Dubin’s Highbridge Capital Management was right behind this move, as the fund sold off about $5.5 million worth. These moves are important to note, as total hedge fund interest was cut by 5 funds by the end of the third quarter.

As you can see these stocks had an average of 16.25 hedge funds with bullish positions and the average amount invested in these stocks was $168 million. That figure was $248 million in ITGR’s case. Medifast, Inc. (NYSE:MED) is the most popular stock in this table. On the other hand Fox Factory Holding Corp (NASDAQ:FOXF) is the least popular one with only 10 bullish hedge fund positions. Integer Holdings Corporation (NYSE:ITGR) is not the most popular stock in this group but hedge fund interest is still above average. This is a slightly positive signal but we’d rather spend our time researching stocks that hedge funds are piling on. In this regard MED might be a better candidate to consider a long position.

Should You Buy The Hanover Insurance Group, Inc. (THG)?
Monthly Newsletter Strategy
Download a free copy of our newsletter and see the details inside!
Hedge Fund Resource Center
Related News
Is Integer Holdings Corporation (ITGR) Going to Burn These Hedge Funds? 11 Countries With The Worst Modern Music In The World The Top 5 Robo Advisor Apps of 2018 Five Reasons You Need a Day-Trading Mentor
Billionaire Hedge Funds