Is Insteel Industries Inc (IIIN) A Good Stock To Buy?

Before we spend days researching a stock idea we’d like to take a look at how hedge funds and billionaire investors recently traded that stock. S&P 500 Index ETF (SPY) lost 8.7% through October 26th. Forty percent of the S&P 500 constituents were down more than 10%. The average return of a randomly picked stock in the index is -9.5%. This means you (or a monkey throwing a dart) have less than an even chance of beating the market by randomly picking a stock. On the other hand, the top 25 most popular S&P 500 stocks among hedge funds had an average loss of 8.8%. In this article, we will take a look at what hedge funds think about Insteel Industries Inc (NASDAQ:IIIN).

Insteel Industries Inc (NASDAQ:IIIN) investors should pay attention to an increase in activity from the world’s largest hedge funds lately. Our calculations also showed that IIIN isn’t among the 30 most popular stocks among hedge funds.

What have hedge funds been doing with Insteel Industries Inc (NASDAQ:IIIN)?

Heading into the fourth quarter of 2018, a total of 16 of the hedge funds tracked by Insider Monkey held long positions in this stock, a change of 220% from the previous quarter. The graph below displays the number of hedge funds with bullish position in IIIN over the last 13 quarters. So, let’s see which hedge funds were among the top holders of the stock and which hedge funds were making big moves. 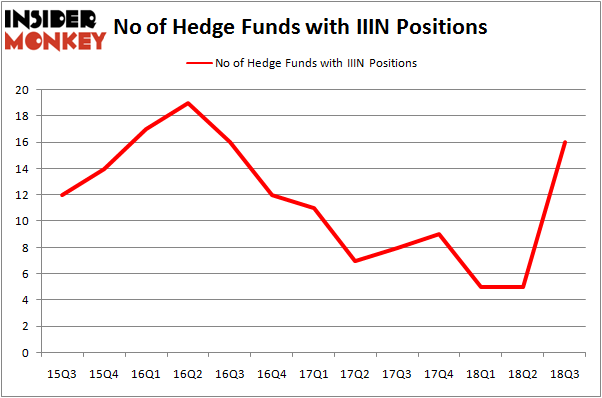 Of the funds tracked by Insider Monkey, Chuck Royce’s Royce & Associates has the number one position in Insteel Industries Inc (NASDAQ:IIIN), worth close to $27.5 million, accounting for 0.2% of its total 13F portfolio. Coming in second is Millennium Management, led by Israel Englander, holding a $9 million position; less than 0.1%% of its 13F portfolio is allocated to the company. Other members of the smart money with similar optimism contain Ken Griffin’s Citadel Investment Group, Paul Hondros’s AlphaOne Capital Partners and John Overdeck and David Siegel’s Two Sigma Advisors.

As industrywide interest jumped, some big names have been driving this bullishness. Millennium Management, managed by Israel Englander, created the biggest position in Insteel Industries Inc (NASDAQ:IIIN). Millennium Management had $9 million invested in the company at the end of the quarter. Jim Simons’s Renaissance Technologies also initiated a $2 million position during the quarter. The other funds with new positions in the stock are D. E. Shaw’s D E Shaw, Joel Greenblatt’s Gotham Asset Management, and Peter Algert and Kevin Coldiron’s Algert Coldiron Investors.

As you can see these stocks had an average of 9.5 hedge funds with bullish positions and the average amount invested in these stocks was $44 million. That figure was $57 million in IIIN’s case. M/I Homes Inc (NYSE:MHO) is the most popular stock in this table. On the other hand Unity Biotechnology, Inc. (NASDAQ:UBX) is the least popular one with only 4 bullish hedge fund positions. Compared to these stocks Insteel Industries Inc (NASDAQ:IIIN) is more popular among hedge funds. Considering that hedge funds are fond of this stock in relation to its market cap peers, it may be a good idea to analyze it in detail and potentially include it in your portfolio.