Is Independent Bank Corporation (IBCP) A Good Stock To Buy?

“Since 2006, value stocks (IVE vs IVW) have underperformed 11 of the 13 calendar years and when they beat growth, it wasn’t by much. Cumulatively, through this week, it has been a 122% differential (up 52% for value vs up 174% for growth). This appears to be the longest and most severe drought for value investors since data collection began. It will go our way eventually as there are too many people paying far too much for today’s darlings, both public and private. Further, the ten-year yield of 2.5% (pre-tax) isn’t attractive nor is real estate. We believe the value part of the global equity market is the only place to earn solid risk adjusted returns and we believe those returns will be higher than normal,” said Vilas Fund in its Q1 investor letter. We aren’t sure whether value stocks outperform growth, but we follow hedge fund investor letters to understand where the markets and stocks might be going. This article will lay out and discuss the hedge fund and institutional investor sentiment towards Independent Bank Corporation (NASDAQ:IBCP).

Independent Bank Corporation (NASDAQ:IBCP) shares haven’t seen a lot of action during the first quarter. Overall, hedge fund sentiment was unchanged. The stock was in 11 hedge funds’ portfolios at the end of March. The level and the change in hedge fund popularity aren’t the only variables you need to analyze to decipher hedge funds’ perspectives. A stock may witness a boost in popularity but it may still be less popular than similarly priced stocks. That’s why at the end of this article we will examine companies such as Peapack-Gladstone Financial Corp (NASDAQ:PGC), El Pollo LoCo Holdings Inc (NASDAQ:LOCO), and Triple-S Management Corp. (NYSE:GTS) to gather more data points.

What does smart money think about Independent Bank Corporation (NASDAQ:IBCP)?

At the end of the first quarter, a total of 11 of the hedge funds tracked by Insider Monkey held long positions in this stock, a change of 0% from the previous quarter. On the other hand, there were a total of 11 hedge funds with a bullish position in IBCP a year ago. With hedge funds’ positions undergoing their usual ebb and flow, there exists an “upper tier” of notable hedge fund managers who were upping their stakes substantially (or already accumulated large positions). 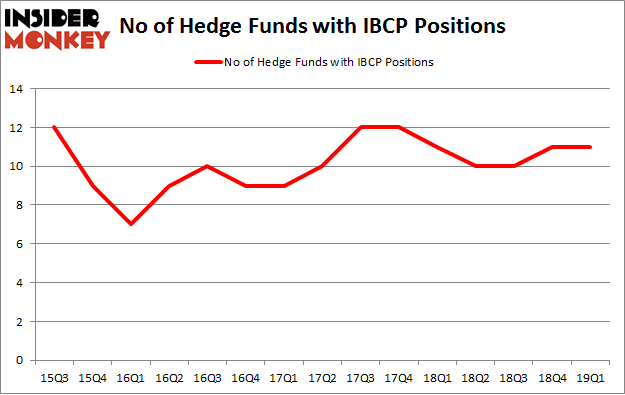 According to Insider Monkey’s hedge fund database, Jim Simons’s Renaissance Technologies has the most valuable position in Independent Bank Corporation (NASDAQ:IBCP), worth close to $23.6 million, accounting for less than 0.1%% of its total 13F portfolio. Sitting at the No. 2 spot is Millennium Management, managed by Israel Englander, which holds a $5.7 million position; less than 0.1%% of its 13F portfolio is allocated to the stock. Some other hedge funds and institutional investors with similar optimism contain Cliff Asness’s AQR Capital Management, D. E. Shaw’s D E Shaw and Noam Gottesman’s GLG Partners.

Judging by the fact that Independent Bank Corporation (NASDAQ:IBCP) has experienced falling interest from hedge fund managers, it’s easy to see that there were a few hedge funds that slashed their full holdings heading into Q3. Intriguingly, Thomas Bailard’s Bailard Inc dumped the largest stake of the 700 funds tracked by Insider Monkey, comprising about $0.4 million in stock. Peter Algert and Kevin Coldiron’s fund, Algert Coldiron Investors, also said goodbye to its stock, about $0.3 million worth. These transactions are important to note, as total hedge fund interest stayed the same (this is a bearish signal in our experience).

As you can see these stocks had an average of 12.5 hedge funds with bullish positions and the average amount invested in these stocks was $55 million. That figure was $47 million in IBCP’s case. Peapack-Gladstone Financial Corp (NASDAQ:PGC) is the most popular stock in this table. On the other hand REX American Resources Corp (NYSE:REX) is the least popular one with only 6 bullish hedge fund positions. Independent Bank Corporation (NASDAQ:IBCP) is not the least popular stock in this group but hedge fund interest is still below average. This is a slightly negative signal and we’d rather spend our time researching stocks that hedge funds are piling on. Our calculations showed that top 20 most popular stocks among hedge funds returned 6.2% in Q2 through June 19th and outperformed the S&P 500 ETF (SPY) by nearly 3 percentage points. Unfortunately IBCP wasn’t nearly as popular as these 20 stocks (hedge fund sentiment was quite bearish); IBCP investors were disappointed as the stock returned 2.4% during the same time period and underperformed the market. If you are interested in investing in large cap stocks with huge upside potential, you should check out the top 20 most popular stocks among hedge funds as 13 of these stocks already outperformed the market so far in Q2.