Hewlett-Packard Company (NYSE:HPQ) CEO Meg Whitman recently gave earnings guidance for the 2013 fiscal year (which ends next October) which disappointed the street, naming “multiple changes in CEOs” as one of the company’s largest problems over the past several years- subtly suggesting that she should be allowed to continue running HP. The guidance numbers came in at a range centered at $3.50 per share in earnings, driving the stock down about 13% on the day as the sell-side consensus had previously been for EPS of $4.18. With the price currently at about $15, that represents a forward P/E just above 4.

Why so low? Well, the PC business is not doing well and the Personal Systems segment, which includes HP’s PC products, is a major source of revenue for the company. eReaders have become tablets, capturing much of the functionality of laptops in a more portable form, and even smartphones are increasingly becoming a limited-purpose computing alternative. Specifically, revenue in Personal Systems was down 10% last quarter compared to a year earlier, driving operating income in the segment down 28%. With HP’s other sources of business generally experiencing declines as well, total revenue ended up down 5% and operating income, after adjusting for a large impairment of goodwill and higher restructuring charges which made the company technically unprofitable for the quarter, came in at only $2.0 billion versus $2.5 billion in the same period in 2011.

Still: only four times internal forward estimates? When the dividend yield is 3.1% and was increased by 10% earlier this year? It’s possible that the plunge in the stock price this year- it was the Dow’s biggest loser even before its decline today (read about more declining Dow components)– has gone too far. Dell Inc. (NASDAQ:DELL) faces similar headwinds to Hewlett-Packard Company in terms of the PC business, and it trades at 6 times trailing earnings and 5 times forward estimates for the fiscal year ending January of 2014. Dell, which is down 36% from its price a year ago, only recently started paying a dividend. However, its business is a bit better off than HP’s- revenue was “only” down 8% in its most recent quarter versus a year ago, and earnings were down 18%- so the two companies seem appropriately valued relative to each other.

Seth Klarman’s Baupost Group was long Hewlett-Packard Company at the end of June, increasing its stake by 56% to nearly 27 million shares and making it the second largest position in the fund’s 13F portfolio (see more stock picks from Seth Klarman). This put Baupost in contrast with Jim Chanos, who was short HP recently (read more about Chanos’s long and short positions).

We’ve discussed Dell, and would also compare HP to more service-oriented International Business Machines Corp. (NYSE:IBM), Accenture Plc (NYSE:ACN), and Teradata Corporation (NYSE:TDC). Teradata is the growth play of the lot: its earnings were up 9% from a year ago in its last quarterly report, driven by higher revenues. However, it is also high priced at trailing and forward P/Es of 34 and 24, respectively. The analytic data solutions company needs to do better than that to prove it is a good value. Accenture’s business has been about flat recently, and its returns over the last year are in line with those of the S&P 500. It trades at a forward P/E of 15- a large premium over HP and Dell even though its business is not doing particularly well either. $240 billion market cap IBM is seeing low earnings growth, though revenue is flagging a bit. It is cheaper- a forward P/E of 13- and we would prefer it to its peers on that basis.

Yet even IBM’s multiple is considerably higher than what we see at HP and Dell. While we think these two peers are priced about right relative to each other, it’s possible that the market is undervaluing both given how cheap they are compared to earnings numbers. We would advise covering any shorts. 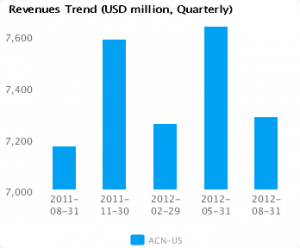 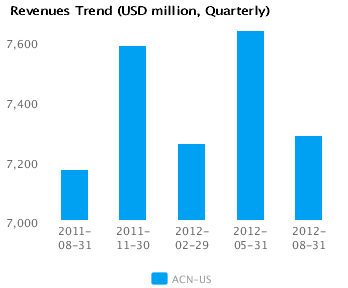 Here’s How Oracle Can Make Billions

Is Texas Instruments a Good Stock to Buy?
Monthly Newsletter Strategy
Download a free copy of our newsletter and see the details inside!
Hedge Fund Resource Center
Billionaire Hedge Funds