We at Insider Monkey have gone over 700 13F filings that hedge funds and prominent investors are required to file by the SEC. The 13F filings show the funds’ and investors’ portfolio positions as of September 30th. In this article we look at what those investors think of Hill-Rom Holdings, Inc. (NYSE:HRC).

Hill-Rom Holdings, Inc. (NYSE:HRC) has experienced an increase in enthusiasm from smart money lately. HRC was in 24 hedge funds’ portfolios at the end of September. There were 23 hedge funds in our database with HRC positions at the end of the previous quarter. Our calculations also showed that HRC isn’t among the 30 most popular stocks among hedge funds.

How have hedgies been trading Hill-Rom Holdings, Inc. (NYSE:HRC)? 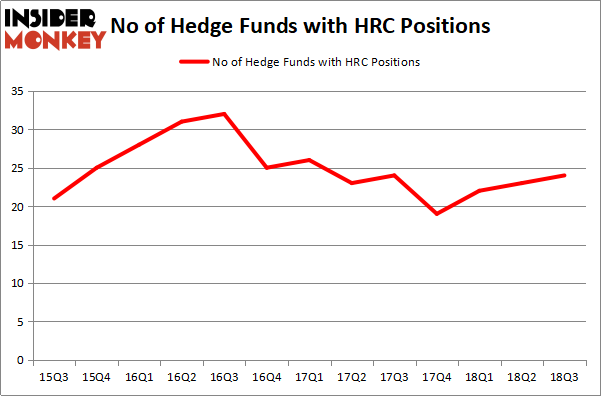 More specifically, Fisher Asset Management was the largest shareholder of Hill-Rom Holdings, Inc. (NYSE:HRC), with a stake worth $123.3 million reported as of the end of September. Trailing Fisher Asset Management was Renaissance Technologies, which amassed a stake valued at $108.1 million. Healthcor Management LP, Citadel Investment Group, and Alyeska Investment Group were also very fond of the stock, giving the stock large weights in their portfolios.

Now, specific money managers were breaking ground themselves. Healthcor Management LP, managed by Arthur B Cohen and Joseph Healey, assembled the most outsized position in Hill-Rom Holdings, Inc. (NYSE:HRC). Healthcor Management LP had $76.3 million invested in the company at the end of the quarter. Robert Joseph Caruso’s Select Equity Group also initiated a $29 million position during the quarter. The other funds with new positions in the stock are Brandon Haley’s Holocene Advisors and Michael Platt and William Reeves’s BlueCrest Capital Mgmt..

As you can see these stocks had an average of 19.5 hedge funds with bullish positions and the average amount invested in these stocks was $345 million. That figure was $662 million in HRC’s case. Insulet Corporation (NASDAQ:PODD) is the most popular stock in this table. On the other hand BWX Technologies Inc (NYSE:BWXT) is the least popular one with only 17 bullish hedge fund positions. Compared to these stocks Hill-Rom Holdings, Inc. (NYSE:HRC) is more popular among hedge funds. Considering that hedge funds are fond of this stock in relation to its market cap peers, it may be a good idea to analyze it in detail and potentially include it in your portfolio.