Is Helen of Troy Limited (HELE) Going to Burn These Hedge Funds?

Hedge Funds and other institutional investors have just completed filing their 13Fs with the Securities and Exchange Commission, revealing their equity portfolios as of the end of September. At Insider Monkey, we follow over 700 of the best-performing investors and by analyzing their 13F filings, we can determine the stocks that they are collectively bullish on. One of their picks is Helen of Troy Limited (NASDAQ:HELE), so let’s take a closer look at the sentiment that surrounds it in the current quarter.

Helen of Troy Limited (NASDAQ:HELE) has experienced a decrease in activity from the world’s largest hedge funds in recent months. Our calculations also showed that HELE isn’t among the 30 most popular stocks among hedge funds.

To the average investor there are several metrics shareholders use to grade their holdings. Two of the most underrated metrics are hedge fund and insider trading indicators. We have shown that, historically, those who follow the best picks of the best money managers can outclass the broader indices by a solid margin (see the details here).

How are hedge funds trading Helen of Troy Limited (NASDAQ:HELE)? 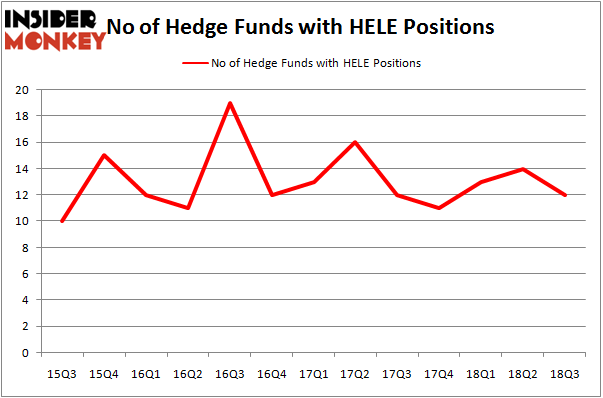 Among these funds, Fisher Asset Management held the most valuable stake in Helen of Troy Limited (NASDAQ:HELE), which was worth $99.4 million at the end of the third quarter. On the second spot was Marshall Wace LLP which amassed $33 million worth of shares. Moreover, Citadel Investment Group, GLG Partners, and Millennium Management were also bullish on Helen of Troy Limited (NASDAQ:HELE), allocating a large percentage of their portfolios to this stock.

Judging by the fact that Helen of Troy Limited (NASDAQ:HELE) has experienced a decline in interest from the smart money, it’s safe to say that there were a few hedgies that elected to cut their full holdings heading into Q3. Intriguingly, Ken Griffin’s Citadel Investment Group dropped the largest investment of the “upper crust” of funds followed by Insider Monkey, valued at about $3.4 million in stock, and Jim Simons’s Renaissance Technologies was right behind this move, as the fund dropped about $1.7 million worth. These moves are important to note, as aggregate hedge fund interest fell by 2 funds heading into Q3.

As you can see these stocks had an average of 19.75 hedge funds with bullish positions and the average amount invested in these stocks was $428 million. That figure was $156 million in HELE’s case. Blueprint Medicines Corporation (NASDAQ:BPMC) is the most popular stock in this table. On the other hand Eastgroup Properties Inc (NYSE:EGP) is the least popular one with only 5 bullish hedge fund positions. Helen of Troy Limited (NASDAQ:HELE) is not the least popular stock in this group but hedge fund interest is still below average. This is a slightly negative signal and we’d rather spend our time researching stocks that hedge funds are piling on. In this regard BPMC might be a better candidate to consider a long position.