Is Hawaiian Electric Industries, Inc. (HE) A Good Stock To Buy?

The elite funds run by legendary investors such as Dan Loeb and David Tepper make hundreds of millions of dollars for themselves and their investors by spending enormous resources doing research on small cap stocks that big investment banks don’t follow. Because of their pay structures, they have strong incentive to do the research necessary to beat the market. That’s why we pay close attention to what they think in small cap stocks. In this article, we take a closer look at Hawaiian Electric Industries, Inc. (NYSE:HE) from the perspective of those elite funds.

Hawaiian Electric Industries, Inc. (NYSE:HE) was in 11 hedge funds’ portfolios at the end of September. HE shareholders have witnessed an increase in hedge fund sentiment of late. There were 10 hedge funds in our database with HE positions at the end of the previous quarter. Our calculations also showed that HE isn’t among the 30 most popular stocks among hedge funds.

What have hedge funds been doing with Hawaiian Electric Industries, Inc. (NYSE:HE)? 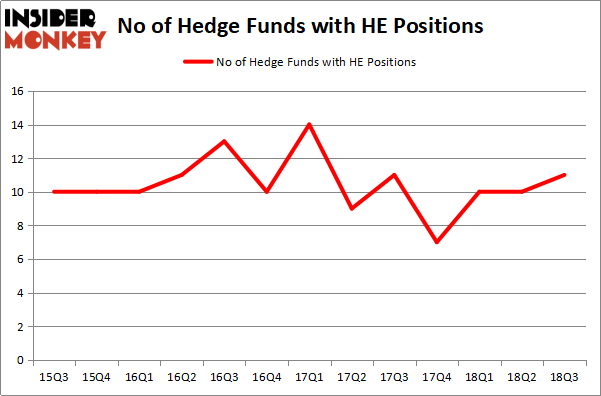 More specifically, ValueAct Capital was the largest shareholder of Hawaiian Electric Industries, Inc. (NYSE:HE), with a stake worth $42.6 million reported as of the end of September. Trailing ValueAct Capital was Renaissance Technologies, which amassed a stake valued at $27 million. AQR Capital Management, Blackstart Capital, and Two Sigma Advisors were also very fond of the stock, giving the stock large weights in their portfolios.

As you can see these stocks had an average of 15.75 hedge funds with bullish positions and the average amount invested in these stocks was $217 million. That figure was $118 million in HE’s case. Ryder System, Inc. (NYSE:R) is the most popular stock in this table. On the other hand MB Financial, Inc. (NASDAQ:MBFI) is the least popular one with only 13 bullish hedge fund positions. Compared to these stocks Hawaiian Electric Industries, Inc. (NYSE:HE) is even less popular than MBFI. Considering that hedge funds aren’t fond of this stock in relation to other companies analyzed in this article, it may be a good idea to analyze it in detail and understand why the smart money isn’t behind this stock. This isn’t necessarily bad news. Although it is possible that hedge funds may think the stock is overpriced and view the stock as a short candidate, they may not be very familiar with the bullish thesis. In either case more research is warranted.