Is Haemonetics Corporation (HAE) Going to Burn These Hedge Funds?

Is Haemonetics Corporation (NYSE:HAE) a good investment right now? We check hedge fund and billionaire investor sentiment before delving into hours of research. Hedge funds spend millions of dollars on Ivy League graduates, expert networks, and get tips from industry insiders. They sometimes fail miserably but historically their consensus stock picks outperformed the market after adjusting for known risk factors.

Haemonetics Corporation (NYSE:HAE) has experienced a decrease in support from the world’s most elite money managers lately. Our calculations also showed that HAE isn’t among the 30 most popular stocks among hedge funds.

In the financial world there are several formulas stock traders can use to value publicly traded companies. Two of the less utilized formulas are hedge fund and insider trading indicators. Our experts have shown that, historically, those who follow the top picks of the top investment managers can outpace the broader indices by a significant margin (see the details here).

At the end of the third quarter, a total of 22 of the hedge funds tracked by Insider Monkey were bullish on this stock, a change of -8% from the previous quarter. By comparison, 24 hedge funds held shares or bullish call options in HAE heading into this year. With the smart money’s positions undergoing their usual ebb and flow, there exists a few key hedge fund managers who were upping their holdings substantially (or already accumulated large positions). 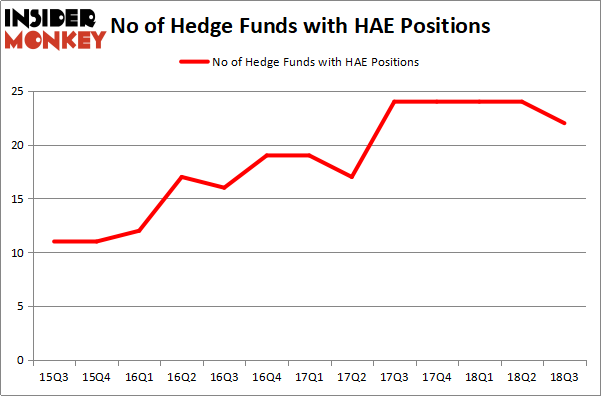 Among these funds, Renaissance Technologies held the most valuable stake in Haemonetics Corporation (NYSE:HAE), which was worth $258.6 million at the end of the third quarter. On the second spot was GLG Partners which amassed $80.6 million worth of shares. Moreover, D E Shaw, Columbus Circle Investors, and Healthcor Management LP were also bullish on Haemonetics Corporation (NYSE:HAE), allocating a large percentage of their portfolios to this stock.

Judging by the fact that Haemonetics Corporation (NYSE:HAE) has faced a decline in interest from hedge fund managers, it’s safe to say that there was a specific group of funds who sold off their entire stakes by the end of the third quarter. At the top of the heap, Matthew Tewksbury’s Stevens Capital Management cut the largest investment of all the hedgies tracked by Insider Monkey, valued at about $3.1 million in stock, and Ernest Chow and Jonathan Howe’s Sensato Capital Management was right behind this move, as the fund dumped about $1.9 million worth. These moves are intriguing to say the least, as total hedge fund interest fell by 2 funds by the end of the third quarter.

Let’s check out hedge fund activity in other stocks – not necessarily in the same industry as Haemonetics Corporation (NYSE:HAE) but similarly valued. We will take a look at Commscope Holding Company Inc (NASDAQ:COMM), PacWest Bancorp (NASDAQ:PACW), Healthequity Inc (NASDAQ:HQY), and Hexcel Corporation (NYSE:HXL). This group of stocks’ market caps are similar to HAE’s market cap.

As you can see these stocks had an average of 23.75 hedge funds with bullish positions and the average amount invested in these stocks was $442 million. That figure was $573 million in HAE’s case. Commscope Holding Company Inc (NASDAQ:COMM) is the most popular stock in this table. On the other hand Healthequity Inc (NASDAQ:HQY) is the least popular one with only 15 bullish hedge fund positions. Haemonetics Corporation (NYSE:HAE) is not the least popular stock in this group but hedge fund interest is still below average. This is a slightly negative signal and we’d rather spend our time researching stocks that hedge funds are piling on. In this regard COMM might be a better candidate to consider a long position.