How do you pick the next stock to invest in? One way would be to spend hours of research browsing through thousands of publicly traded companies. However, an easier way is to look at the stocks that smart money investors are collectively bullish on. Hedge funds and other institutional investors usually invest large amounts of capital and have to conduct due diligence while choosing their next pick. They don’t always get it right, but, on average, their stock picks historically generated strong returns after adjusting for known risk factors. With this in mind, let’s take a look at the recent hedge fund activity surrounding Grupo Financiero Galicia S.A. (NASDAQ:GGAL).

Is Grupo Financiero Galicia S.A. (NASDAQ:GGAL) ready to rally soon? Investors who are in the know are in a pessimistic mood. The number of long hedge fund positions went down by 2 in recent months. Our calculations also showed that GGAL isn’t among the 30 most popular stocks among hedge funds. GGAL was in 17 hedge funds’ portfolios at the end of the first quarter of 2019. There were 19 hedge funds in our database with GGAL positions at the end of the previous quarter. 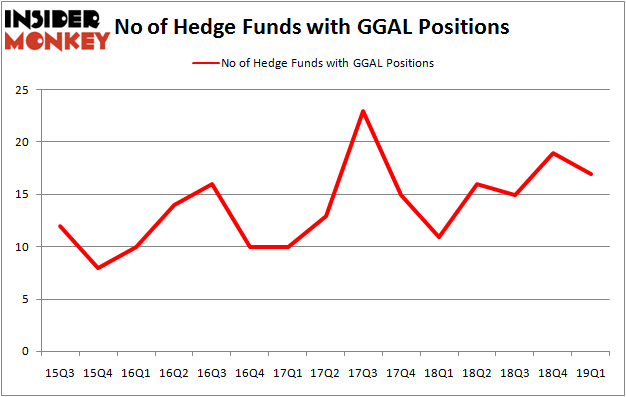 Because Grupo Financiero Galicia S.A. (NASDAQ:GGAL) has experienced bearish sentiment from hedge fund managers, it’s safe to say that there was a specific group of funds who sold off their full holdings heading into Q3. At the top of the heap, David Halpert’s Prince Street Capital Management sold off the largest stake of all the hedgies monitored by Insider Monkey, totaling close to $20.2 million in stock. Richard Driehaus’s fund, Driehaus Capital, also said goodbye to its stock, about $15.7 million worth. These bearish behaviors are intriguing to say the least, as total hedge fund interest dropped by 2 funds heading into Q3.

As you can see these stocks had an average of 24 hedge funds with bullish positions and the average amount invested in these stocks was $315 million. That figure was $115 million in GGAL’s case. American Eagle Outfitters Inc. (NYSE:AEO) is the most popular stock in this table. On the other hand ACI Worldwide Inc (NASDAQ:ACIW) is the least popular one with only 23 bullish hedge fund positions. Compared to these stocks Grupo Financiero Galicia S.A. (NASDAQ:GGAL) is even less popular than ACIW. Hedge funds clearly dropped the ball on GGAL as the stock delivered strong returns, though hedge funds’ consensus picks still generated respectable returns. Our calculations showed that top 20 most popular stocks among hedge funds returned 6.2% in Q2 through June 19th and outperformed the S&P 500 ETF (SPY) by nearly 3 percentage points. A small number of hedge funds were also right about betting on GGAL as the stock returned 29.8% during the same period and outperformed the market by an even larger margin.