Is GreenSky, Inc. (NASDAQ:GSKY) an outstanding investment today? The best stock pickers are getting less optimistic. The number of long hedge fund positions decreased by 5 in recent months. Our calculations also showed that gsky isn’t among the 30 most popular stocks among hedge funds.

At the end of the first quarter, a total of 15 of the hedge funds tracked by Insider Monkey were long this stock, a change of -25% from the previous quarter. By comparison, 0 hedge funds held shares or bullish call options in GSKY a year ago. With the smart money’s capital changing hands, there exists a few notable hedge fund managers who were increasing their holdings substantially (or already accumulated large positions). 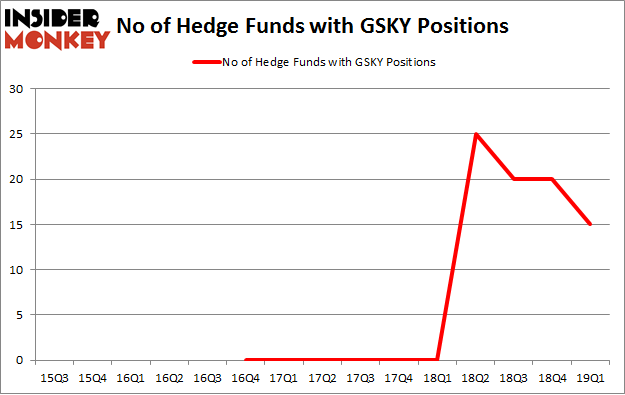 Of the funds tracked by Insider Monkey, Paul Marshall and Ian Wace’s Marshall Wace LLP has the number one position in GreenSky, Inc. (NASDAQ:GSKY), worth close to $14.1 million, comprising 0.1% of its total 13F portfolio. The second most bullish fund manager is Arrowstreet Capital, managed by Peter Rathjens, Bruce Clarke and John Campbell, which holds a $12.2 million position; less than 0.1%% of its 13F portfolio is allocated to the stock. Other hedge funds and institutional investors with similar optimism encompass D. E. Shaw’s D E Shaw, John Overdeck and David Siegel’s Two Sigma Advisors and Paul Reeder and Edward Shapiro’s PAR Capital Management.

Seeing as GreenSky, Inc. (NASDAQ:GSKY) has witnessed bearish sentiment from hedge fund managers, we can see that there was a specific group of fund managers that decided to sell off their positions entirely heading into Q3. Intriguingly, Curtis Schenker and Craig Effron’s Scoggin cut the largest position of the 700 funds watched by Insider Monkey, comprising an estimated $3.1 million in stock, and Joseph A. Jolson’s Harvest Capital Strategies was right behind this move, as the fund dropped about $2.9 million worth. These bearish behaviors are interesting, as total hedge fund interest was cut by 5 funds heading into Q3.

As you can see these stocks had an average of 20.5 hedge funds with bullish positions and the average amount invested in these stocks was $345 million. That figure was $69 million in GSKY’s case. Acacia Communications, Inc. (NASDAQ:ACIA) is the most popular stock in this table. On the other hand CoreCivic, Inc. (NYSE:CXW) is the least popular one with only 14 bullish hedge fund positions. GreenSky, Inc. (NASDAQ:GSKY) is not the least popular stock in this group but hedge fund interest is still below average. This is a slightly negative signal and we’d rather spend our time researching stocks that hedge funds are piling on. Our calculations showed that top 20 most popular stocks among hedge funds returned 6.2% in Q2 through June 19th and outperformed the S&P 500 ETF (SPY) by nearly 3 percentage points. Unfortunately GSKY wasn’t nearly as popular as these 20 stocks (hedge fund sentiment was quite bearish); GSKY investors were disappointed as the stock returned -0.4% during the same time period and underperformed the market. If you are interested in investing in large cap stocks with huge upside potential, you should check out the top 20 most popular stocks among hedge funds as 13 of these stocks already outperformed the market so far in Q2.