Is GRC A Good Stock To Buy Now?

In this article you are going to find out whether hedge funds think The Gorman-Rupp Company (NYSE:GRC) is a good investment right now. We like to check what the smart money thinks first before doing extensive research on a given stock. Although there have been several high profile failed hedge fund picks, the consensus picks among hedge fund investors have historically outperformed the market after adjusting for known risk attributes. It’s not surprising given that hedge funds have access to better information and more resources to predict the winners in the stock market.

Is GRC a good stock to buy now? Hedge fund interest in The Gorman-Rupp Company (NYSE:GRC) shares was flat at the end of last quarter. This is usually a negative indicator. Our calculations also showed that GRC isn’t among the 30 most popular stocks among hedge funds (click for Q3 rankings and see the video for a quick look at the top 5 stocks). At the end of this article we will also compare GRC to other stocks including Magnite Inc. (NASDAQ:MGNI), Oric Pharmaceuticals, Inc. (NASDAQ:ORIC), and GrowGeneration Corp. (NASDAQ:GRWG) to get a better sense of its popularity.

If you’d ask most traders, hedge funds are viewed as slow, outdated financial vehicles of yesteryear. While there are more than 8000 funds in operation at the moment, Our researchers look at the moguls of this club, approximately 850 funds. These investment experts handle bulk of the smart money’s total asset base, and by tracking their unrivaled investments, Insider Monkey has brought to light several investment strategies that have historically outrun Mr. Market. Insider Monkey’s flagship short hedge fund strategy defeated the S&P 500 short ETFs by around 20 percentage points annually since its inception in March 2017. Our portfolio of short stocks lost 13% since February 2017 (through November 17th) even though the market was up 65% during the same period. We just shared a list of 6 short targets in our latest quarterly update .

At Insider Monkey we scour multiple sources to uncover the next great investment idea. For example, Federal Reserve has been creating trillions of dollars electronically to keep the interest rates near zero. We believe this will lead to inflation and boost real estate prices. So, we recommended this real estate stock to our monthly premium newsletter subscribers. We go through lists like the 15 best blue chip stocks to pick the best large-cap stocks to buy. Even though we recommend positions in only a tiny fraction of the companies we analyze, we check out as many stocks as we can. We read hedge fund investor letters and listen to stock pitches at hedge fund conferences. You can subscribe to our free daily newsletter on our website. With all of this in mind let’s take a gander at the fresh hedge fund action regarding The Gorman-Rupp Company (NYSE:GRC).

Do Hedge Funds Think GRC Is A Good Stock To Buy Now?

At the end of September, a total of 10 of the hedge funds tracked by Insider Monkey were long this stock, a change of 0% from the previous quarter. By comparison, 10 hedge funds held shares or bullish call options in GRC a year ago. With hedge funds’ capital changing hands, there exists a select group of noteworthy hedge fund managers who were upping their stakes meaningfully (or already accumulated large positions). 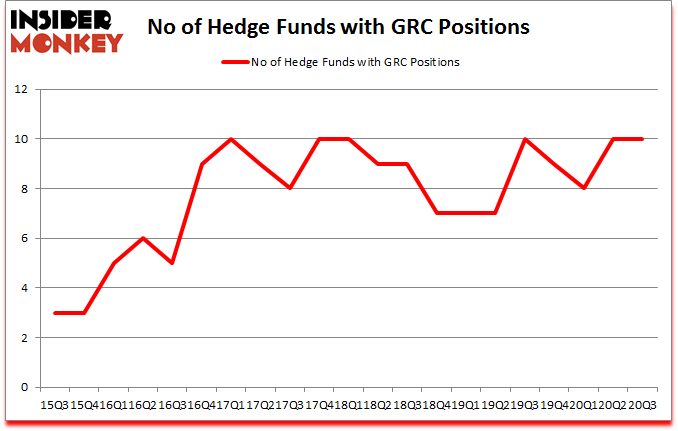 Among these funds, GAMCO Investors held the most valuable stake in The Gorman-Rupp Company (NYSE:GRC), which was worth $15 million at the end of the third quarter. On the second spot was Royce & Associates which amassed $8.9 million worth of shares. Renaissance Technologies, Arrowstreet Capital, and AQR Capital Management were also very fond of the stock, becoming one of the largest hedge fund holders of the company. In terms of the portfolio weights assigned to each position GAMCO Investors allocated the biggest weight to The Gorman-Rupp Company (NYSE:GRC), around 0.17% of its 13F portfolio. Royce & Associates is also relatively very bullish on the stock, setting aside 0.1 percent of its 13F equity portfolio to GRC.

Judging by the fact that The Gorman-Rupp Company (NYSE:GRC) has witnessed declining sentiment from hedge fund managers, we can see that there were a few hedge funds that decided to sell off their positions entirely by the end of the third quarter. At the top of the heap, Israel Englander’s Millennium Management sold off the biggest stake of the 750 funds watched by Insider Monkey, valued at an estimated $0.4 million in stock, and Roger Ibbotson’s Zebra Capital Management was right behind this move, as the fund dropped about $0.2 million worth. These transactions are important to note, as aggregate hedge fund interest stayed the same (this is a bearish signal in our experience).

As you can see these stocks had an average of 16.6 hedge funds with bullish positions and the average amount invested in these stocks was $118 million. That figure was $37 million in GRC’s case. Magnite Inc. (NASDAQ:MGNI) is the most popular stock in this table. On the other hand Oric Pharmaceuticals, Inc. (NASDAQ:ORIC) is the least popular one with only 10 bullish hedge fund positions. Compared to these stocks The Gorman-Rupp Company (NYSE:GRC) is even less popular than ORIC. Our overall hedge fund sentiment score for GRC is 35. Stocks with higher number of hedge fund positions relative to other stocks as well as relative to their historical range receive a higher sentiment score. Hedge funds clearly dropped the ball on GRC as the stock delivered strong returns, though hedge funds’ consensus picks still generated respectable returns. Our calculations showed that top 20 most popular stocks among hedge funds returned 41.3% in 2019 and outperformed the S&P 500 ETF (SPY) by 10 percentage points. These stocks gained 32.9% in 2020 through December 8th and still beat the market by 16.2 percentage points. A small number of hedge funds were also right about betting on GRC as the stock returned 15.7% since Q3 (through December 8th) and outperformed the market by an even larger margin.

Is GRC A Good Investment Right Now?Is GRC A Good Stock To Buy?NYSE:GRCSentiment Score Between 30 and 40Yahoo Finance