Is GoPro Inc (GPRO) A Good Stock To Buy?

GoPro Inc (NASDAQ:GPRO) shares haven’t seen a lot of action during the third quarter. Overall, hedge fund sentiment was unchanged. The stock was in 14 hedge funds’ portfolios at the end of September. At the end of this article we will also compare GPRO to other stocks including Iovance Biotherapeutics, Inc. (NASDAQ:IOVA), LGI Homes Inc (NASDAQ:LGIH), and Live Oak Bancshares Inc (NASDAQ:LOB) to get a better sense of its popularity. 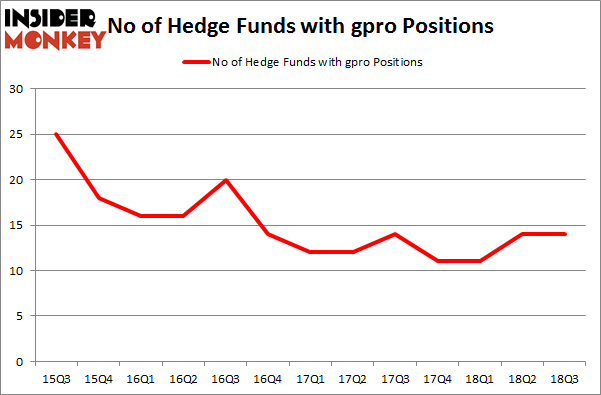 More specifically, Renaissance Technologies was the largest shareholder of GoPro Inc (NASDAQ:GPRO), with a stake worth $44.1 million reported as of the end of September. Trailing Renaissance Technologies was Marshall Wace LLP, which amassed a stake valued at $16.7 million. Citadel Investment Group, Millennium Management, and D E Shaw were also very fond of the stock, giving the stock large weights in their portfolios.

Since GoPro Inc (NASDAQ:GPRO) has experienced declining sentiment from the smart money, logic holds that there exists a select few funds who sold off their entire stakes heading into Q3. Interestingly, Andrew Feldstein and Stephen Siderow’s Blue Mountain Capital dumped the biggest position of the 700 funds tracked by Insider Monkey, valued at about $0.4 million in stock, and David Costen Haley’s HBK Investments was right behind this move, as the fund sold off about $0.2 million worth. These transactions are important to note, as total hedge fund interest stayed the same (this is a bearish signal in our experience).

As you can see these stocks had an average of 17 hedge funds with bullish positions and the average amount invested in these stocks was $185 million. That figure was $102 million in GPRO’s case. Iovance Biotherapeutics, Inc. (NASDAQ:IOVA) is the most popular stock in this table. On the other hand Live Oak Bancshares Inc (NASDAQ:LOB) is the least popular one with only 8 bullish hedge fund positions. GoPro Inc (NASDAQ:GPRO) is not the least popular stock in this group but hedge fund interest is still below average. This is a slightly negative signal and we’d rather spend our time researching stocks that hedge funds are piling on. In this regard IOVA might be a better candidate to consider a long position.

Sun Life Financial Inc. (SLF)Hedge Funds Are Snapping Up
Monthly Newsletter Strategy
Download a free copy of our newsletter and see the details inside!
Hedge Fund Resource Center
Related News
Apple, Cirrus Logic, GoPro, and More: Here’s Why These Stocks Are On the Move 7 Best Drone Stocks to Buy 34 Key Stories That You Should Read To Know How Financial Markets Are Doing Today GoPro Inc (GPRO) Shares Surge Due to Trade-Up Program Tesla, GoPro, KCG Holdings, and More: Here’s Why These Five Stocks Are Trending Today Should You Buy GoPro Inc (GPRO) Stock Going Into Q4 Earnings? Should You Buy GoPro Inc (GPRO) Stock After Yesterday’s Pop? 11 Best Inexpensive Bourbons Under $25 That Don’t Taste Cheap 10 Best Vacation Spots for Singles in Their 40’s 15 Highest Paid YouTubers of 2018
Billionaire Hedge Funds