We at Insider Monkey have gone over 700 13F filings that hedge funds and prominent investors are required to file by the SEC. The 13F filings show the funds’ and investors’ portfolio positions as of September 30th. In this article we look at what those investors think of Golden Ocean Group Ltd (NASDAQ:GOGL).

Golden Ocean Group Ltd (NASDAQ:GOGL) was in 6 hedge funds’ portfolios at the end of September. GOGL investors should be aware of a decrease in enthusiasm from smart money lately. There were 7 hedge funds in our database with GOGL positions at the end of the previous quarter. Our calculations also showed that GOGL isn’t among the 30 most popular stocks among hedge funds.

Heading into the fourth quarter of 2018, a total of 6 of the hedge funds tracked by Insider Monkey were bullish on this stock, a change of -14% from one quarter earlier. On the other hand, there were a total of 9 hedge funds with a bullish position in GOGL at the beginning of this year. With hedge funds’ capital changing hands, there exists a select group of key hedge fund managers who were upping their stakes substantially (or already accumulated large positions). 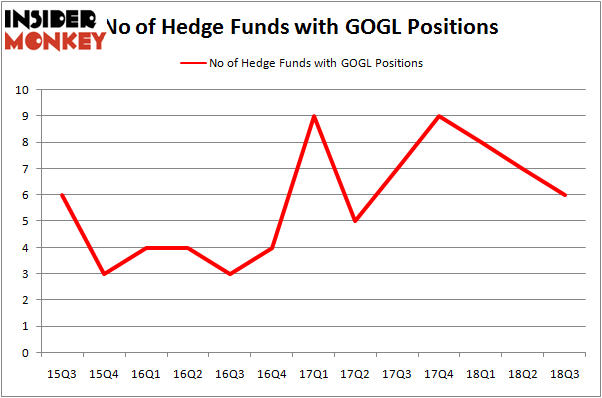 The largest stake in Golden Ocean Group Ltd (NASDAQ:GOGL) was held by Platinum Asset Management, which reported holding $159.3 million worth of stock at the end of September. It was followed by Renaissance Technologies with a $20.3 million position. Other investors bullish on the company included Marshall Wace LLP, GLG Partners, and Millennium Management.

Since Golden Ocean Group Ltd (NASDAQ:GOGL) has experienced a decline in interest from the aggregate hedge fund industry, it’s safe to say that there lies a certain “tier” of fund managers who were dropping their positions entirely last quarter. At the top of the heap, Louis Navellier’s Navellier & Associates dropped the largest position of the “upper crust” of funds monitored by Insider Monkey, comprising an estimated $0.7 million in stock, and Joel Greenblatt’s Gotham Asset Management was right behind this move, as the fund sold off about $0.1 million worth. These bearish behaviors are interesting, as total hedge fund interest was cut by 1 funds last quarter.

As you can see these stocks had an average of 13.25 hedge funds with bullish positions and the average amount invested in these stocks was $63 million. That figure was $200 million in GOGL’s case. Abercrombie & Fitch Co. (NYSE:ANF) is the most popular stock in this table. On the other hand NGL Energy Partners LP (NYSE:NGL) is the least popular one with only 5 bullish hedge fund positions. Golden Ocean Group Ltd (NASDAQ:GOGL) is not the least popular stock in this group but hedge fund interest is still below average. This is a slightly negative signal and we’d rather spend our time researching stocks that hedge funds are piling on. In this regard ANF might be a better candidate to consider a long position.