Is GIS A Good Stock To Buy According To Hedge Funds?

The Insider Monkey team has completed processing the quarterly 13F filings for the September quarter submitted by the hedge funds and other money managers included in our extensive database. Most hedge fund investors experienced strong gains on the back of a strong market performance, which certainly propelled them to adjust their equity holdings so as to maintain the desired risk profile. As a result, the relevancy of these public filings and their content is indisputable, as they may reveal numerous high-potential stocks. The following article will discuss the smart money sentiment towards General Mills, Inc. (NYSE:GIS).

Is GIS a good stock to buy? The smart money was selling. The number of bullish hedge fund positions were cut by 1 lately. General Mills, Inc. (NYSE:GIS) was in 36 hedge funds’ portfolios at the end of September. The all time high for this statistic is 42. Our calculations also showed that GIS isn’t among the 30 most popular stocks among hedge funds (click for Q3 rankings and see the video for a quick look at the top 5 stocks).

At Insider Monkey we leave no stone unturned when looking for the next great investment idea. For example, the House passed a landmark bill decriminalizing marijuana. So, we are checking out this under the radar cannabis stock right now. We go through lists like the 15 best blue chip stocks to buy to pick the best large-cap stocks to buy. Even though we recommend positions in only a tiny fraction of the companies we analyze, we check out as many stocks as we can. We read hedge fund investor letters and listen to stock pitches at hedge fund conferences. You can subscribe to our free daily newsletter on our website. With all of this in mind let’s check out the recent hedge fund action encompassing General Mills, Inc. (NYSE:GIS).

Do Hedge Funds Think GIS Is A Good Stock To Buy Now? 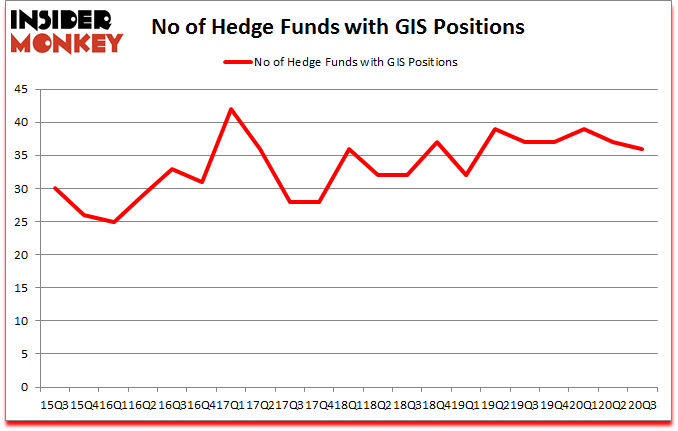 According to publicly available hedge fund and institutional investor holdings data compiled by Insider Monkey, Renaissance Technologies, holds the largest position in General Mills, Inc. (NYSE:GIS). Renaissance Technologies has a $402.1 million position in the stock, comprising 0.4% of its 13F portfolio. Sitting at the No. 2 spot is Two Sigma Advisors, led by John Overdeck and David Siegel, holding a $212.5 million position; 0.6% of its 13F portfolio is allocated to the stock. Some other professional money managers that hold long positions contain D. E. Shaw’s D E Shaw, Cliff Asness’s AQR Capital Management and Phill Gross and Robert Atchinson’s Adage Capital Management. In terms of the portfolio weights assigned to each position Half Sky Capital allocated the biggest weight to General Mills, Inc. (NYSE:GIS), around 8.7% of its 13F portfolio. Wallace Capital Management is also relatively very bullish on the stock, earmarking 2.8 percent of its 13F equity portfolio to GIS.

Because General Mills, Inc. (NYSE:GIS) has experienced bearish sentiment from hedge fund managers, it’s easy to see that there lies a certain “tier” of fund managers that elected to cut their full holdings by the end of the third quarter. It’s worth mentioning that Donald Sussman’s Paloma Partners sold off the biggest position of the 750 funds followed by Insider Monkey, totaling close to $6.5 million in stock. Ben Levine, Andrew Manuel and Stefan Renold’s fund, LMR Partners, also cut its stock, about $6.5 million worth. These transactions are interesting, as aggregate hedge fund interest dropped by 1 funds by the end of the third quarter.

As you can see these stocks had an average of 25.4 hedge funds with bullish positions and the average amount invested in these stocks was $867 million. That figure was $1054 million in GIS’s case. Electronic Arts Inc. (NASDAQ:EA) is the most popular stock in this table. On the other hand Prudential Public Limited Company (NYSE:PUK) is the least popular one with only 4 bullish hedge fund positions. General Mills, Inc. (NYSE:GIS) is not the most popular stock in this group but hedge fund interest is still above average. Our overall hedge fund sentiment score for GIS is 57.3. Stocks with higher number of hedge fund positions relative to other stocks as well as relative to their historical range receive a higher sentiment score. This is a slightly positive signal but we’d rather spend our time researching stocks that hedge funds are piling on. Our calculations showed that top 20 most popular stocks among hedge funds returned 41.3% in 2019 and outperformed the S&P 500 ETF (SPY) by 10 percentage points. These stocks gained 33.3% in 2020 through December 18th and beat the market again by 16.4 percentage points. Unfortunately GIS wasn’t nearly as popular as these 20 stocks and hedge funds that were betting on GIS were disappointed as the stock returned -2.9% since the end of September (through 12/18) and underperformed the market. If you are interested in investing in large cap stocks with huge upside potential, you should check out the top 20 most popular stocks among hedge funds as many of these stocks already outperformed the market so far this year.

Is GIS A Good Investment Right Now?Is GIS A Good Stock To Buy?NYSE:GISSentiment Score Between 50 and 60Yahoo Finance

Is CTAS A Good Stock To Buy Now?

Is PRI A Good Stock To Buy Now?

Is VEEV A Good Stock To Buy Now?

Is ESI A Good Stock To Buy Now?