Like everyone else, elite investors make mistakes. Some of their top consensus picks, such as Amazon, Facebook, and Alibaba, have not done well in October due to various reasons. Nevertheless, the data show elite investors’ consensus picks have done well on average over the long-term. The top 30 S&P 500 stocks among hedge funds at the end of September 2018 returned an average of 6.7% through November 15th whereas the S&P 500 Index ETF gained only 2.6% during the same period. Because their consensus picks have done well, we pay attention to what elite funds think before doing extensive research on a stock. In this article, we take a closer look at Genworth Financial Inc (NYSE:GNW) from the perspective of those elite funds.

Hedge fund interest in Genworth Financial Inc shares was flat at the end of last quarter. This is usually a negative indicator. The level and the change in hedge fund popularity aren’t the only variables you need to analyze to decipher hedge funds’ perspectives. A stock may witness a boost in popularity but it may still be less popular than similarly priced stocks. That’s why at the end of this article we will examine companies such as Granite Construction Incorporated (NYSE:GVA), Hudson Ltd. (NYSE:HUD), and LCI Industries (NYSE:LCII) to gather more data points.

While collecting data for our write-up, we came across Miller Value Partners’ third-quarter 2018 letter to shareholders, that gives its opinion on Genworth. The fund has a large position in the company and had this to say in the letter:

“During the quarter, Maiden Holdings (MHLD), Bed Bath and Beyond (BBBY), Seaspan Corp (SSW), Teva Pharmaceuticals (TEVA) and Genworth (GNW) were the largest detractors, albeit their overall drag on the performance was less than half of the top five contributors during the quarter.”

Our readers will be interested to know that Thomas J. McInerney, the President and Chief Executive Officer of the company, was responsible for the last major insider purchase of the company’s common stock, snapping up 30,000 shares at $5.21. The shares presently trade at $4.45 as of this writing, so McInerney did not make a lot of money on the purchase.

At the end of the third quarter, a total of 22 of the hedge funds tracked by Insider Monkey were long this stock, representing no change from one quarter earlier. Below, you can check out the change in hedge fund sentiment towards GNW over the last 13 quarters. So, let’s see which hedge funds were among the top holders of the stock and which hedge funds were making big moves. 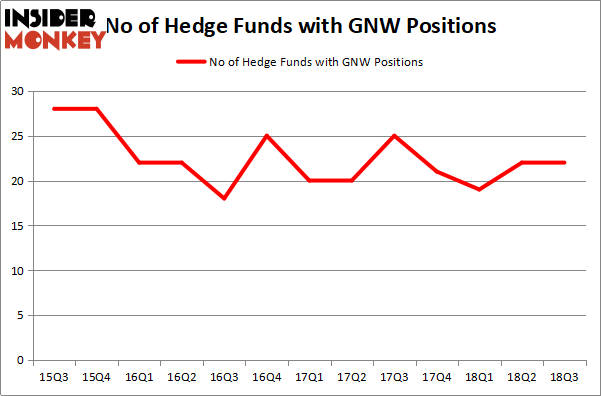 The largest stake in Genworth Financial Inc (NYSE:GNW) was held by Shah Capital Management, which reported holding $26.7 million worth of stock at the end of September. It was followed by Saba Capital with a $9.7 million position. Other investors bullish on the company included Citadel Investment Group, GLG Partners, and D E Shaw.

Seeing as Genworth Financial Inc (NYSE:GNW) has experienced falling interest from the aggregate hedge fund industry, logic holds that there were a few hedge funds that elected to cut their full holdings in the third quarter. It’s worth mentioning that Christopher Pucillo’s Solus Alternative Asset Management dropped the largest position of all the hedgies followed by Insider Monkey, valued at about $15.8 million in stock. Robert Emil Zoellner’s fund, Alpine Associates, also cut its stock, about $7.1 million worth. These bearish behaviors are interesting, as total hedge fund interest stayed the same (this is a bearish signal in our experience).

As you can see these stocks had an average of 14 hedge funds with bullish positions and the average amount invested in these stocks was $76 million. That figure was $74 million in GNW’s case. Hudson Ltd. (NYSE:HUD) is the most popular stock in this table. On the other hand, ServisFirst Bancshares, Inc. (NASDAQ:SFBS) is the least popular one with only 8 bullish hedge fund positions. Compared to these stocks Genworth Financial Inc (NYSE:GNW) is more popular among hedge funds. Considering that hedge funds are fond of this stock in relation to its market cap peers, it may be a good idea to analyze it in detail and potentially include it in your portfolio.