Is Genesee & Wyoming Inc (GWR) A Good Stock To Buy?

As we already know from media reports and hedge fund investor letters, many hedge funds lost money in October, blaming macroeconomic conditions and unpredictable events that hit several sectors, with healthcare among them. Nevertheless, most investors decided to stick to their bullish theses and their long-term focus allows us to profit from the recent declines. In particular, let’s take a look at what hedge funds think about Genesee & Wyoming Inc (NYSE:GWR) in this article.

Is Genesee & Wyoming Inc (NYSE:GWR) a buy right now? Investors who are in the know are turning less bullish. The number of long hedge fund positions were cut by 4 lately. Our calculations also showed that GWR isn’t among the 30 most popular stocks among hedge funds. GWR was in 11 hedge funds’ portfolios at the end of the third quarter of 2018. There were 15 hedge funds in our database with GWR holdings at the end of the previous quarter.

How have hedgies been trading Genesee & Wyoming Inc (NYSE:GWR)?

At Q3’s end, a total of 11 of the hedge funds tracked by Insider Monkey were long this stock, a change of -27% from the previous quarter. Below, you can check out the change in hedge fund sentiment towards GWR over the last 13 quarters. With hedge funds’ sentiment swirling, there exists a few notable hedge fund managers who were adding to their holdings substantially (or already accumulated large positions). 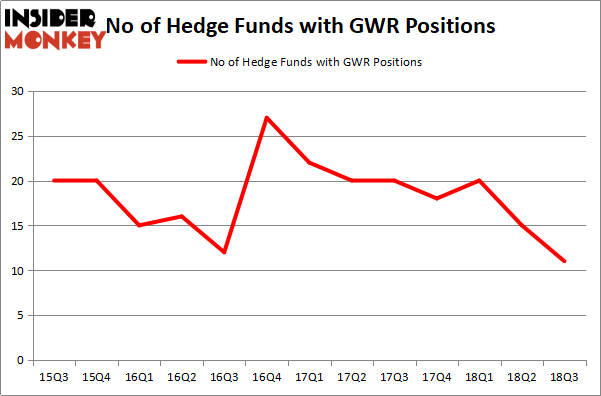 When looking at the institutional investors followed by Insider Monkey, Cardinal Capital, managed by Amy Minella, holds the number one position in Genesee & Wyoming Inc (NYSE:GWR). Cardinal Capital has a $133.5 million position in the stock, comprising 4.2% of its 13F portfolio. Coming in second is Blue Harbour Group, led by Clifton S. Robbins, holding a $114 million position; 5.3% of its 13F portfolio is allocated to the stock. Some other members of the smart money with similar optimism include Edward Goodnow’s Goodnow Investment Group, David Keidan’s Buckingham Capital Management and Paul Reeder and Edward Shapiro’s PAR Capital Management.

Seeing as Genesee & Wyoming Inc (NYSE:GWR) has witnessed falling interest from the aggregate hedge fund industry, we can see that there exists a select few money managers that slashed their positions entirely last quarter. It’s worth mentioning that Steve Cohen’s Point72 Asset Management sold off the biggest investment of the “upper crust” of funds monitored by Insider Monkey, comprising close to $6.5 million in stock. Richard S. Meisenberg’s fund, ACK Asset Management, also said goodbye to its stock, about $5.4 million worth. These transactions are intriguing to say the least, as aggregate hedge fund interest was cut by 4 funds last quarter.

As you can see these stocks had an average of 15.25 hedge funds with bullish positions and the average amount invested in these stocks was $215 million. That figure was $325 million in GWR’s case. Proofpoint Inc (NASDAQ:PFPT) is the most popular stock in this table. On the other hand Brookfield Renewable Partners L.P. (NYSE:BEP) is the least popular one with only 2 bullish hedge fund positions. Genesee & Wyoming Inc (NYSE:GWR) is not the least popular stock in this group but hedge fund interest is still below average. This is a slightly negative signal and we’d rather spend our time researching stocks that hedge funds are piling on. In this regard PFPT might be a better candidate to consider a long position.