At Insider Monkey we follow around 740 of the top investors and even though many of them underperformed the raging bull market, the history teaches us that over the long-run they still manage to beat the market after adjusting for risk, which is why it can be profitable for us to imitate their activity. Of course, even the best money managers can sometimes get it wrong, but following their best picks gives us a better chance to outperform the crowd than picking a random stock and this is where our research comes in.

In this article, let’s take a closer look at General Motors Company (NYSE:GM), which registered a decrease in enthusiasm from smart money in recent months. There were 62 funds in our database with GM holdings at the end of September, compared to 65 funds at the end of June. The level and the change in hedge fund popularity aren’t the only variables you need to analyze to decipher hedge funds’ perspectives. A stock may witness a boost in popularity but it may still be less popular than similarly priced stocks. That’s why at the end of this article we will examine companies such as Metlife Inc (NYSE:MET), salesforce.com, inc. (NYSE:CRM), and The Southern Company (NYSE:SO) to gather more data points.

What have hedge funds been doing with General Motors Company (NYSE:GM)? 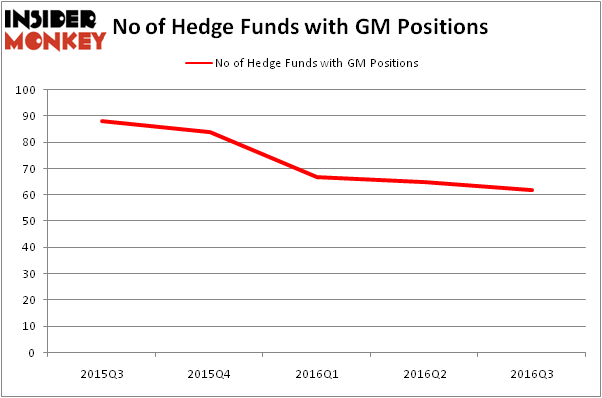 When looking at the institutional investors followed by Insider Monkey, Berkshire Hathaway, led by the legendary Warren Buffett, holds the most valuable position in General Motors Company (NYSE:GM). According to regulatory filings, Berkshire Hathaway has a $1.59 billion position in the stock, comprising 1.2% of its 13F portfolio. The second largest stake is held by David Einhorn’s Greenlight Capital, which disclosed a $540.1 million position; the fund has 10.3% of its 13F portfolio invested in the stock. Remaining peers that hold long positions contain Cliff Asness’s AQR Capital Management, Robert Polak’s Anchor Bolt Capital, and Mohnish Pabrai’s Dalal Street. We should note that none of these hedge funds are among our list of the 100 best performing hedge funds which is based on the performance of their 13F long positions in non-microcap stocks.