Is General Electric Company (GE) A Good Stock To Buy?

General Electric Company (NYSE:GE) has experienced an increase in activity from the world’s largest hedge funds of late. GE was in 46 hedge funds’ portfolios at the end of the third quarter of 2018. There were 44 hedge funds in our database with GE positions at the end of the previous quarter. Our calculations also showed that GE isn’t among the 30 most popular stocks among hedge funds.

Nelson Peltz’s Trian Partners has been targeting GE since 2015. Here is how they summarized their involvement:

“In October 2015, Trian announced its investment in GE. In October 2017, Trian’s Chief Investment Officer and a Founding Partner, Ed Garden, was elected to the GE board of directors.

In June 2018, GE announced the results of a strategic review, in which GE will focus on Aviation, Power and Renewable Energy, creating a simpler, stronger, leading high-tech Industrial company. In addition to the pending combination of its Transportation business with Wabtec, GE plans to separate GE Healthcare into a standalone company, pursue an orderly separation from BHGE (Baker Hughes, a GE company) over the next two to three years, make its corporate structure leaner, substantially reduce debt and improve liquidity. The actions unlock both a pure-play healthcare company and a tier-one oil and gas servicing and equipment manufacturer. Trian supports these strategic initiatives and believes that these initiatives will create substantial value for shareholders.” 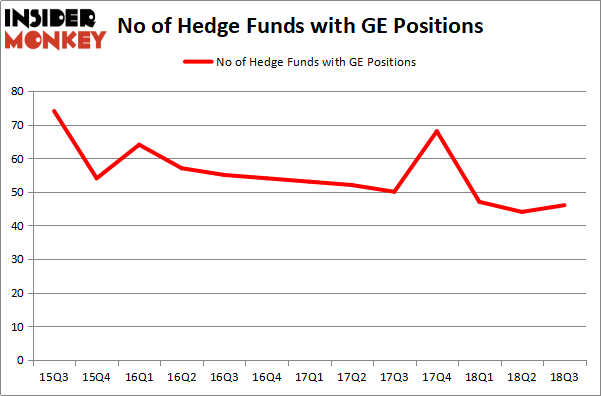 Among these funds, Viking Global held the most valuable stake in General Electric Company (NYSE:GE), which was worth $1495.1 million at the end of the third quarter. On the second spot was Trian Partners which amassed $800.1 million worth of shares. Moreover, Southeastern Asset Management, Pzena Investment Management, and DE Shaw were also bullish on General Electric Company (NYSE:GE), allocating a large percentage of their portfolios to this stock.

As industrywide interest jumped, key money managers have been driving this bullishness. Canyon Capital Advisors, managed by Joshua Friedman and Mitchell Julis, initiated the biggest position in General Electric Company (NYSE:GE). Canyon Capital Advisors had $200.5 million invested in the company at the end of the quarter. Jeffrey Tannenbaum’s Fir Tree also made a $44.8 million investment in the stock during the quarter. The other funds with brand new GE positions are Ray Dalio’s Bridgewater Associates, and Sander Gerber’s Hudson Bay Capital Management.

As you can see these stocks had an average of 46.75 hedge funds with bullish positions and the average amount invested in these stocks was $7627 million. That figure was $4540 million in GE’s case. Booking Holdings Inc. (NASDAQ:BKNG) is the most popular stock in this table. On the other hand, Equinor ASA (NYSE:EQNR) is the least popular one with only 12 bullish hedge fund positions. General Electric Company (NYSE:GE) is not the least popular stock in this group but hedge fund interest is still below average. This is a slightly negative signal and we’d rather spend our time researching stocks that hedge funds are piling on. In this regard, BKNG might be a better candidate to consider a long position.