Is GE A Good Stock To Buy Now?

Hedge funds and large money managers usually invest with a focus on the long-term horizon and, therefore, short-lived dips or bumps on the charts usually don’t make them change their opinion towards a company. This time it may be different. The coronavirus pandemic destroyed the high correlations among major industries and asset classes. We are now in a stock pickers market where fundamentals of a stock have more effect on the price than the overall direction of the market. As a result we observe sudden and large changes in hedge fund positions depending on the news flow. Let’s take a look at the hedge fund sentiment towards General Electric Company (NYSE:GE) to find out whether there were any major changes in hedge funds’ views.

Is GE a good stock to buy now? The smart money was taking a bearish view. The number of bullish hedge fund positions were cut by 12 recently. General Electric Company (NYSE:GE) was in 45 hedge funds’ portfolios at the end of September. The all time high for this statistic is 74. Our calculations also showed that GE isn’t among the 30 most popular stocks among hedge funds (click for Q3 rankings and see the video for a quick look at the top 5 stocks). There were 57 hedge funds in our database with GE holdings at the end of June.

At Insider Monkey we leave no stone unturned when looking for the next great investment idea. For example, the House passed a landmark bill decriminalizing marijuana. So, we are checking out this under the radar cannabis stock right now. We go through lists like the 15 best blue chip stocks to buy to pick the best large-cap stocks to buy. Even though we recommend positions in only a tiny fraction of the companies we analyze, we check out as many stocks as we can. We read hedge fund investor letters and listen to stock pitches at hedge fund conferences. You can subscribe to our free daily newsletter on our website. Now let’s take a look at the latest hedge fund action encompassing General Electric Company (NYSE:GE).

Do Hedge Funds Think GE Is A Good Stock To Buy Now?

At the end of September, a total of 45 of the hedge funds tracked by Insider Monkey were bullish on this stock, a change of -21% from the previous quarter. On the other hand, there were a total of 58 hedge funds with a bullish position in GE a year ago. With hedgies’ sentiment swirling, there exists a select group of key hedge fund managers who were boosting their stakes substantially (or already accumulated large positions). 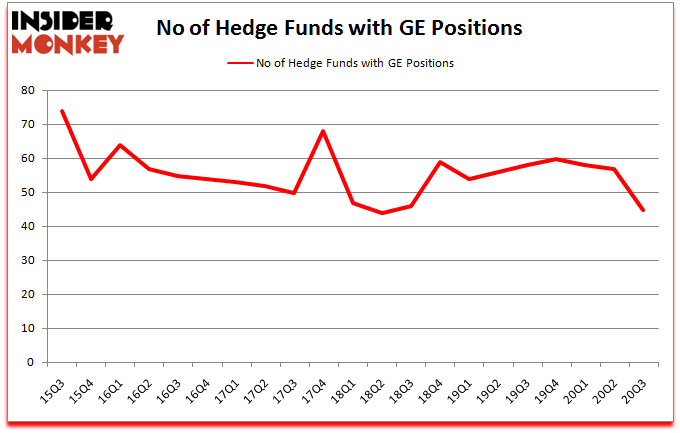 According to publicly available hedge fund and institutional investor holdings data compiled by Insider Monkey, Boykin Curry’s Eagle Capital Management has the number one position in General Electric Company (NYSE:GE), worth close to $820.9 million, accounting for 2.9% of its total 13F portfolio. The second most bullish fund manager is Richard S. Pzena of Pzena Investment Management, with a $555.9 million position; the fund has 3.5% of its 13F portfolio invested in the stock. Remaining hedge funds and institutional investors with similar optimism include Mason Hawkins’s Southeastern Asset Management, Kerr Neilson’s Platinum Asset Management and Nelson Peltz’s Trian Partners. In terms of the portfolio weights assigned to each position Southeastern Asset Management allocated the biggest weight to General Electric Company (NYSE:GE), around 6.04% of its 13F portfolio. Lansdowne Partners is also relatively very bullish on the stock, designating 5.58 percent of its 13F equity portfolio to GE.

Seeing as General Electric Company (NYSE:GE) has witnessed a decline in interest from the aggregate hedge fund industry, we can see that there lies a certain “tier” of hedge funds who were dropping their entire stakes in the third quarter. It’s worth mentioning that Robert M. P. Luciano’s VGI Partners sold off the largest position of all the hedgies monitored by Insider Monkey, comprising an estimated $32 million in stock. John Overdeck and David Siegel’s fund, Two Sigma Advisors, also said goodbye to its stock, about $14.5 million worth. These transactions are interesting, as total hedge fund interest was cut by 12 funds in the third quarter.

As you can see these stocks had an average of 44.4 hedge funds with bullish positions and the average amount invested in these stocks was $4013 million. That figure was $2748 million in GE’s case. Mercadolibre Inc (NASDAQ:MELI) is the most popular stock in this table. On the other hand ABB Ltd (NYSE:ABB) is the least popular one with only 13 bullish hedge fund positions. General Electric Company (NYSE:GE) is not the most popular stock in this group but hedge fund interest is still above average. Our overall hedge fund sentiment score for GE is 34.8. Stocks with higher number of hedge fund positions relative to other stocks as well as relative to their historical range receive a higher sentiment score. Our calculations showed that top 20 most popular stocks among hedge funds returned 41.3% in 2019 and outperformed the S&P 500 ETF (SPY) by 10 percentage points. These stocks gained 32.9% in 2020 through December 8th and still beat the market by 16.2 percentage points. Hedge funds were also right about betting on GE as the stock returned 75.9% since the end of Q3 (through 12/8) and outperformed the market. Hedge funds were rewarded for their relative bullishness.

Is GE A Good Investment Right Now?is GE a good stock to buyNYSE:GESentiment Score Between 30 and 40Yahoo Finance