Hedge Funds and other institutional investors have just completed filing their 13Fs with the Securities and Exchange Commission, revealing their equity portfolios as of the end of September. At Insider Monkey, we follow over 700 of the best-performing investors and by analyzing their 13F filings, we can determine the stocks that they are collectively bullish on. One of their picks is GCP Applied Technologies Inc. (NYSE:GCP), so let’s take a closer look at the sentiment that surrounds it in the current quarter.

Is GCP Applied Technologies Inc. (NYSE:GCP) a superb investment right now? Prominent investors are turning less bullish. The number of bullish hedge fund positions were trimmed by 1 lately. Our calculations also showed that GCP isn’t among the 30 most popular stocks among hedge funds.

According to most shareholders, hedge funds are perceived as slow, outdated investment vehicles of the past. While there are over 8,000 funds with their doors open at the moment, Our researchers look at the moguls of this group, around 700 funds. These hedge fund managers preside over the majority of all hedge funds’ total capital, and by keeping an eye on their top investments, Insider Monkey has unearthed numerous investment strategies that have historically outperformed the market. Insider Monkey’s flagship hedge fund strategy outperformed the S&P 500 index by 6 percentage points per annum since its inception in May 2014 through early November 2018. We were able to generate large returns even by identifying short candidates. Our portfolio of short stocks lost 24% since February 2017 (through December 3rd) even though the market was up nearly 23% during the same period. We just shared a list of 11 short targets in our latest quarterly update.

What have hedge funds been doing with GCP Applied Technologies Inc. (NYSE:GCP)? 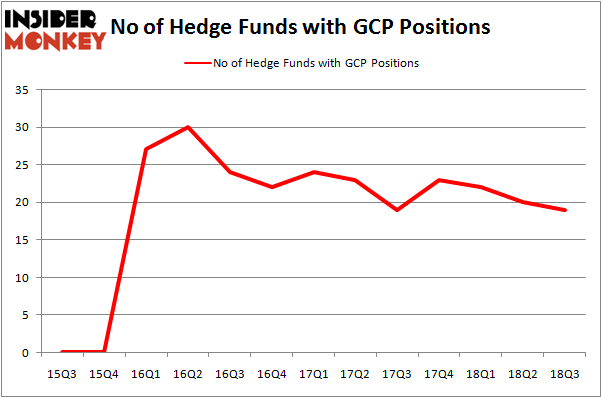 Among these funds, 40 North Management held the most valuable stake in GCP Applied Technologies Inc. (NYSE:GCP), which was worth $135.8 million at the end of the third quarter. On the second spot was GAMCO Investors which amassed $86.6 million worth of shares. Moreover, Adage Capital Management, Moore Global Investments, and Gates Capital Management were also bullish on GCP Applied Technologies Inc. (NYSE:GCP), allocating a large percentage of their portfolios to this stock.

Since GCP Applied Technologies Inc. (NYSE:GCP) has witnessed a decline in interest from the aggregate hedge fund industry, logic holds that there was a specific group of fund managers that elected to cut their full holdings heading into Q3. It’s worth mentioning that Louis Bacon’s Moore Global Investments dropped the largest position of the “upper crust” of funds tracked by Insider Monkey, valued at close to $7.2 million in stock, and Joel Greenblatt’s Gotham Asset Management was right behind this move, as the fund sold off about $3.3 million worth. These moves are important to note, as aggregate hedge fund interest dropped by 1 funds heading into Q3.

As you can see these stocks had an average of 19 hedge funds with bullish positions and the average amount invested in these stocks was $307 million. That figure was $585 million in GCP’s case. MSG Networks Inc (NYSE:MSGN) is the most popular stock in this table. On the other hand Mack Cali Realty Corp (NYSE:CLI) is the least popular one with only 11 bullish hedge fund positions. GCP Applied Technologies Inc. (NYSE:GCP) is not the least popular stock in this group but hedge fund interest is still below average. This is a slightly negative signal and we’d rather spend our time researching stocks that hedge funds are piling on. In this regard MSGN might be a better candidate to consider a long position.