Is GCI Liberty, Inc. (GLIBA) A Good Stock To Buy?

GCI Liberty, Inc. (NASDAQ:GLIBA) has experienced a decrease in hedge fund interest recently. GLIBA was in 36 hedge funds’ portfolios at the end of March. There were 37 hedge funds in our database with GLIBA positions at the end of the previous quarter. Our calculations also showed that gliba isn’t among the 30 most popular stocks among hedge funds.

If you’d ask most stock holders, hedge funds are assumed to be unimportant, outdated investment tools of yesteryear. While there are more than 8000 funds trading at present, Our researchers look at the aristocrats of this group, about 750 funds. These money managers shepherd most of the smart money’s total capital, and by monitoring their top investments, Insider Monkey has figured out numerous investment strategies that have historically exceeded the S&P 500 index. Insider Monkey’s flagship hedge fund strategy defeated the S&P 500 index by around 5 percentage points per year since its inception in May 2014 through the end of May. We were able to generate large returns even by identifying short candidates. Our portfolio of short stocks lost 30.9% since February 2017 (through May 30th) even though the market was up nearly 24% during the same period. We just shared a list of 5 short targets in our latest quarterly update and they are already down an average of 11.9% in less than a couple of weeks whereas our long picks outperformed the market by 2 percentage points in this volatile 2 week period.

How have hedgies been trading GCI Liberty, Inc. (NASDAQ:GLIBA)?

At Q1’s end, a total of 36 of the hedge funds tracked by Insider Monkey were bullish on this stock, a change of -3% from one quarter earlier. By comparison, 47 hedge funds held shares or bullish call options in GLIBA a year ago. With hedge funds’ capital changing hands, there exists an “upper tier” of notable hedge fund managers who were upping their holdings significantly (or already accumulated large positions). 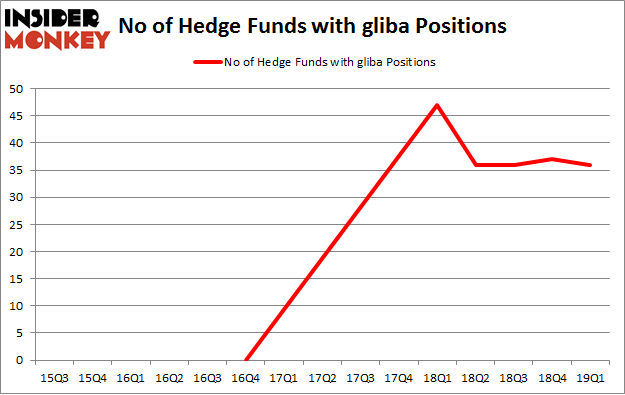 The largest stake in GCI Liberty, Inc. (NASDAQ:GLIBA) was held by FPR Partners, which reported holding $488.3 million worth of stock at the end of March. It was followed by Eagle Capital Management with a $339.6 million position. Other investors bullish on the company included Southeastern Asset Management, Makaira Partners, and D E Shaw.

Judging by the fact that GCI Liberty, Inc. (NASDAQ:GLIBA) has witnessed falling interest from hedge fund managers, it’s easy to see that there lies a certain “tier” of funds who sold off their positions entirely last quarter. It’s worth mentioning that Mitch Kuflik and Rob Sobel’s Brahman Capital dropped the biggest stake of all the hedgies followed by Insider Monkey, totaling close to $19.2 million in stock. Matthew Hulsizer’s fund, PEAK6 Capital Management, also dropped its stock, about $0.4 million worth. These moves are important to note, as aggregate hedge fund interest dropped by 1 funds last quarter.

As you can see these stocks had an average of 24.5 hedge funds with bullish positions and the average amount invested in these stocks was $811 million. That figure was $1903 million in GLIBA’s case. National Instruments Corporation (NASDAQ:NATI) is the most popular stock in this table. On the other hand Healthcare Trust Of America Inc (NYSE:HTA) is the least popular one with only 19 bullish hedge fund positions. Compared to these stocks GCI Liberty, Inc. (NASDAQ:GLIBA) is more popular among hedge funds. Our calculations showed that top 20 most popular stocks among hedge funds returned 1.9% in Q2 through May 30th and outperformed the S&P 500 ETF (SPY) by more than 3 percentage points. Hedge funds were also right about betting on GLIBA as the stock returned 6% during the same period and outperformed the market by an even larger margin. Hedge funds were clearly right about piling into this stock relative to other stocks with similar market capitalizations.