A market correction in the fourth quarter, spurred by a number of global macroeconomic concerns and rising interest rates ended up having a negative impact on the markets and many hedge funds as a result. The stocks of smaller companies were especially hard hit during this time as investors fled to investments seen as being safer. This is evident in the fact that the Russell 2000 ETF underperformed the S&P 500 ETF by 4 percentage points during the first half of the fourth quarter. We also received indications that hedge funds were trimming their positions amid the market volatility and uncertainty, and given their greater inclination towards smaller cap stocks than other investors, it follows that a stronger sell-off occurred in those stocks. Let’s study the hedge fund sentiment to see how those concerns affected their ownership of Franklin Covey Co. (NYSE:FC) during the quarter.

Is Franklin Covey Co. (NYSE:FC) the right investment to pursue these days? Money managers are turning less bullish. The number of bullish hedge fund positions were cut by 1 recently. FC was in 7 hedge funds’ portfolios at the end of the third quarter of 2018. There were 8 hedge funds in our database with FC holdings at the end of the previous quarter. Our calculations show that the company was not one of the 30 most popular stocks among hedge funds.

According to most stock holders, hedge funds are perceived as worthless, old financial tools of the past. While there are greater than 8000 funds in operation at the moment, Our experts look at the crème de la crème of this group, around 700 funds. It is estimated that this group of investors handle most of the hedge fund industry’s total capital, and by shadowing their first-class investments, Insider Monkey has identified several investment strategies that have historically defeated the broader indices. Insider Monkey’s flagship hedge fund strategy outpaced the S&P 500 index by 6 percentage points per annum since its inception in May 2014 through early November 2018. We were able to generate large returns even by identifying short candidates. Our portfolio of short stocks lost 26.1% since February 2017 even though the market was up nearly 19% during the same period. We just shared a list of 11 short targets in our latest quarterly update.

While collecting data on the company, we found Wiedower Capital’s Quarterly Letter to its shareholders. The fund has a long position in the company. Managing Director Travis Wiedower had this to say in his report:

“Franklin Covey (FC) remains our largest position at ~31% and I continue to believe the market is significantly underestimating the quality of their new business model. On the 2017 conference call (their fiscal year ends 8/31), management gave guidance for 2018 that lined up to what I was expecting (higher revenue than I thought, but lower bottom line because of investments). Given their guidance lined up with my own estimates and I think current fair value is in the high $20s to mid-$30s, I was surprised the stock didn’t move up more after earnings. 2018 will be the first year the company is fully lapping the transition to the new business model, so hopefully, after a few quarterly results this year, the market will start to give the company more credit for their new and improved business.

On the valuation side, I struggle to see how the new business model isn’t more efficient than their old one (customers who auto-renew to your software are better than customers you have to explicitly sell products to every year). From 2013-2015 (before this transition began), my estimates for their normalized earnings margins were 7-8%. Now there’s a lot of noise in the current financials due to the transition, but let’s ignore all that and just guess that their new normalized NOPAT margins with a more efficient business will be 9%—a little better than they achieved with their worse business model. Management’s guidance for 2018 revenue is $227 million (including a change in deferred revenue which is real cash in the door). $227 million x 9% = $20.4 million—what I would call owner earnings or NOPAT. I personally believe the company deserves a multiple in the 20s, but even a 20x multiple on those 2018 owner earnings would result in a stock price of $25.28 (~25% above today). If the new business model is more efficient than their old one, it’s hard to justify today’s price. Oh, and that entire calculation is before tax reform. Similar to Parks! America, it’s still unknown how much of the tax cut will drop to the bottom line (increased wages and investments will probably take up a portion), but Franklin Covey is a full taxpayer so they will benefit from tax reform more than most. After tax reform, it’s hard for me to get a fair value lower than the high $20s.”

What does the smart money think about Franklin Covey Co. (NYSE:FC)?

At the end of the third quarter, a total of 7 of the hedge funds tracked by Insider Monkey were long this stock, a change of -13% from the second quarter of 2018. The graph below displays the number of hedge funds with a bullish position in FC over the last 13 quarters. With hedge funds’ positions undergoing their usual ebb and flow, there exists an “upper tier” of key hedge fund managers who were upping their stakes meaningfully (or already accumulated large positions). 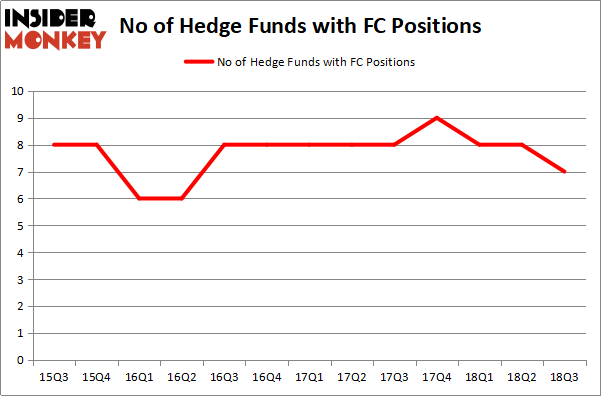 According to publicly available hedge fund and institutional investor holdings data compiled by Insider Monkey, John H Lewis’s Osmium Partners has the biggest position in Franklin Covey Co. (NYSE:FC), worth close to $11.5 million, comprising 10% of its total 13F portfolio. The second most bullish fund manager is Osmium Partners, managed by John H Lewis, which holds a $8 million call position; the fund has 7% of its 13F portfolio invested in the stock. Some other hedge funds and institutional investors that are bullish contain Jim Simons’s Renaissance Technologies, and Chuck Royce’s Royce & Associates.

Due to the fact that Franklin Covey Co. (NYSE:FC) has witnessed declining sentiment from hedge fund managers, we can see that there were a few hedge funds who were dropping their positions entirely last quarter. Intriguingly, Matthew Hulsizer’s PEAK6 Capital Management cut the largest position of the “upper crust” of funds tracked by Insider Monkey, worth close to $0.6 million in call options. D. E. Shaw’s fund, D E Shaw, also said goodbye to its call options, about $0.5 million worth. These transactions are interesting, as total hedge fund interest was cut by 1 funds last quarter.

As you can see these stocks had an average of 7.75 hedge funds with bullish positions and the average amount invested in these stocks was $40 million. That figure was $16 million in FC’s case. Ooma Inc (NYSE:OOMA) is the most popular stock in this table. On the other hand Western Asset/Claymore Inflation-Linked Securities & Income Fund (NYSE:WIA) is the least popular one with only 2 bullish hedge fund positions. Franklin Covey Co. (NYSE:FC) is not the least popular stock in this group but hedge fund interest is still below average. This is a slightly negative signal and we’d rather spend our time researching stocks that hedge funds are piling on. In this regard OOMA might be a better candidate to consider a long position.